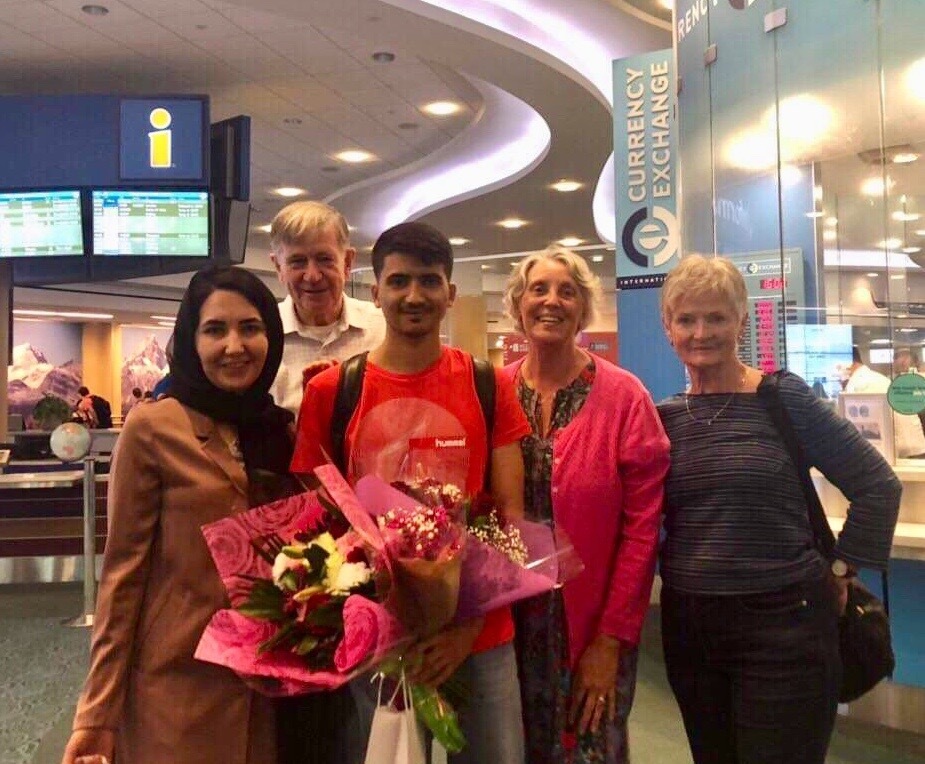 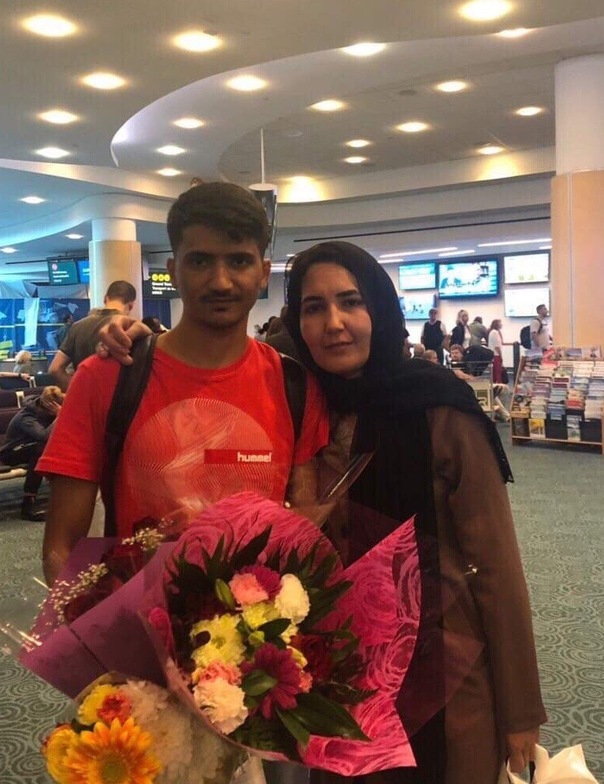 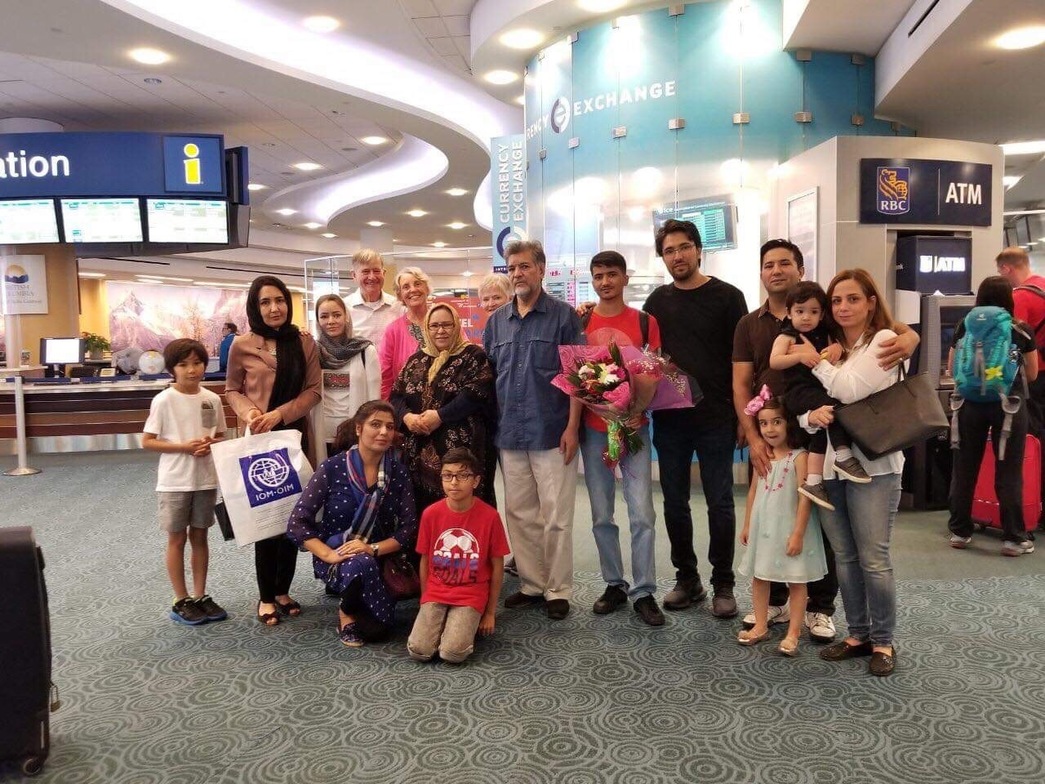 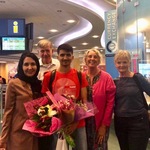 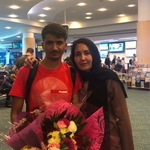 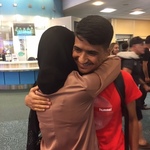 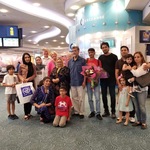 On July 19, Fatemeh welcomed her brother Nasrullah into her arms, as he had just arrived safely in Vancouver. St. Clement’s has been holding Fatemeh and Nasrullah in prayer since first hearing about their family’s deeply tragic story, and this day marks a particularly sorrowful yet hopeful one in their journey. You can read more about Fatemeh’s story and her brother’s arrival below, as written by Wilna Parry:

When I first heard this story, it overwhelmed me. As time wore on, the telling of it created a bond of determination, love, and care amongst a community of very different people, all determined to make a difference and bring about something good out of terrible circumstances.

Fatemeh grew up in a small village in Afghanistan. Her father, a mullah, believed in education and more radically, education for all, including his and his community’s daughters. To his peril, he ignored repeated warnings from the Taliban and continued preaching inclusion. For this he was eventually killed and his wife and their unmarried 4 children still at home, fled Kabul for safety. Fatemeh was by this time married and living in Vancouver and this was the family’s ultimate destination of choice. They formed a plan to escape to Turkey, via Iran and apply for refugee status.

With legal visas to Iran, Fatemeh’s mother, sister and three brothers left Kabul and travelled to Iran, all the time keeping in contact with Fatemeh in Vancouver. One night in early March came a message to say they had made contact with a smuggler and were waiting in his house before escaping across the mountains into Turkey. “Don’t worry about us”, they told her. “He is a good man, he is feeding us well. Soon we will be leaving his house. It is only a 3 hour walk across – we will easily make it”. This was the final message Fatemeh had from her family. Later that night, they were part of a large group dropped off in the mountains and told to start walking. Instructions were to travel light, taking no unnecessary clothing or food for the short journey. In actual fact, the journey was to be 12 – 18 hours of walking through the mountains, during which a fierce, late Spring snow storm hit.

Near the border with Turkey Nasrullah lost consciousness and was picked up by the Turkish border control. He awoke in a small clinic and was immediately taken by police to the nearby morgue to see if he could identify the bodies of some illegal migrants. To his horror, he found his mother, sister and his 2 brothers among the dead. Of his family, he was the only survivor. They had all died of exposure, dehydration and fatigue.

In the meantime, Fatemeh had spent a sleepless night and repeatedly tried to contact her family to see how they were getting on. When she at last managed to contact her brother, it was to hear the worst possible news. She flew to Turkey to be with him, managed to find him somewhere to stay and went on to Afghanistan to bury her family. She later returned to Vancouver, determined to find a way to sponsor him so they can be together.

Fatemeh displayed great courage in telling her story, over and over, in the hopes of finding someone who was in a position to help, and eventually it happened. Through a web of interconnected people, the Diocesan Refugee Unit (Sponsorship Agreement Holder) became involved. St. Clements agreed to act as the constituent group providing funding could be found for a year of sponsorship. Providentially, Christ Church Cathedral had surplus funds after closing out their refugee account and was willing to transfer it to St Clements for them to sponsor Nasrullah.

With expert help from DRU, the application was made and submitted to Canadian Immigration Services at the end of 2018. Fatemeh, accompanied by Dave and Wilna, went to Jonathan Wilkinson’s office in an attempt to speed up the application. A letter of support was written by Jonathan and attached to the file. Nasrullah was told not to get his hopes up as it may take 2 years or more to be approved.

Barely 7 months after application was made, we received word that Nasrullah was booked on a flight and expected to arrive in Vancouver on July 19th. It was hard to believe that this could actually be true but it was.

On a lovely summer afternoon Fatemeh, her uncle and his family, Dave and I, and Chris gathered at YVR arrivals hall to await Nasrullah’s arrival. When the slight young man finally walked into his sister’s arms, I experienced many conflicting emotions: pain, sorrow, grief, immense relief that this young man was finally safe, and also great hope.

Woven into a tapestry of God’s love and mercy for each one of us, know that we are all held together by a common humanity. Therefore, we as a community hope and pray for a new beginning, a fresh start and that these words ring true for this young man and his family:

“In the dark times

Will there also be singing?

Yes, there will also be singing

About the dark times”

Our grateful thanks for all who in these troubling times show compassion and inclusivity and above all, open-hearted and a loving welcome to all who flee unimaginable tragedy. Please pray for Fatemeh and Nasrullah as they embark, together, on a path towards healing and a better future.

PS At the time of writing Fatemeh’s remaining sister & family remain in grave danger in Kabul. We are trying to think of a way of bringing them to safety.