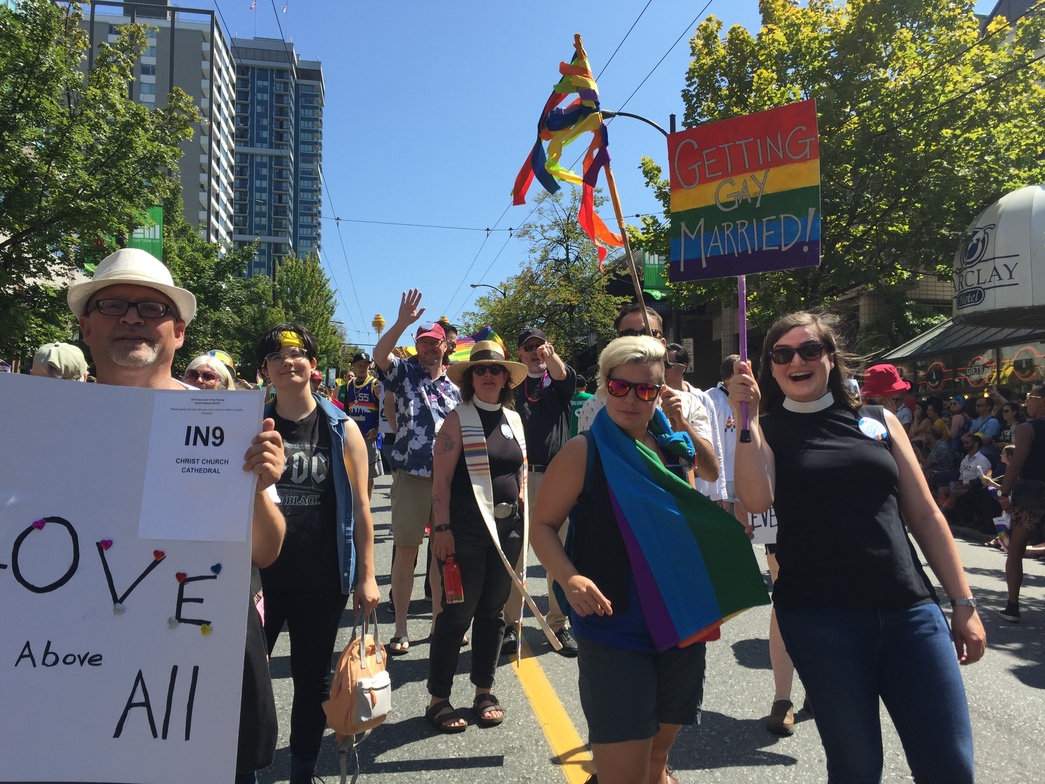 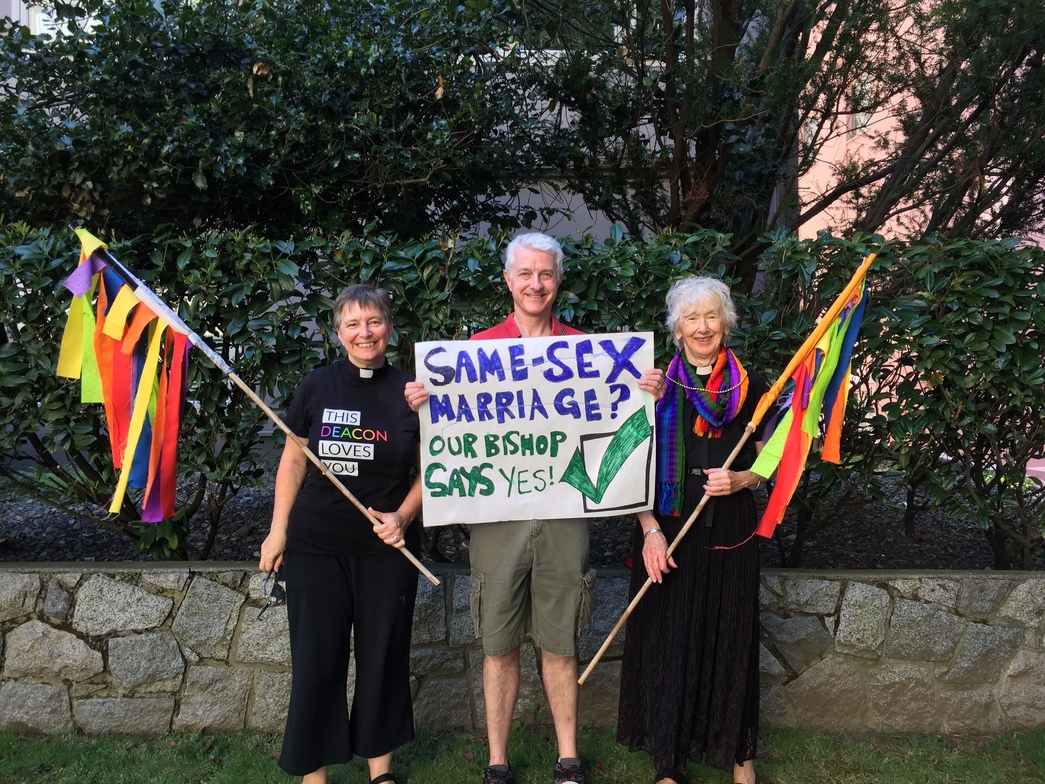 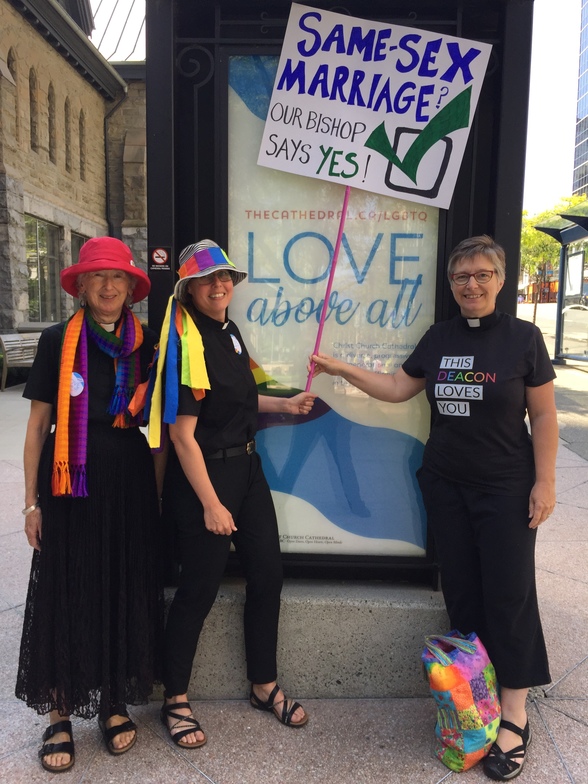 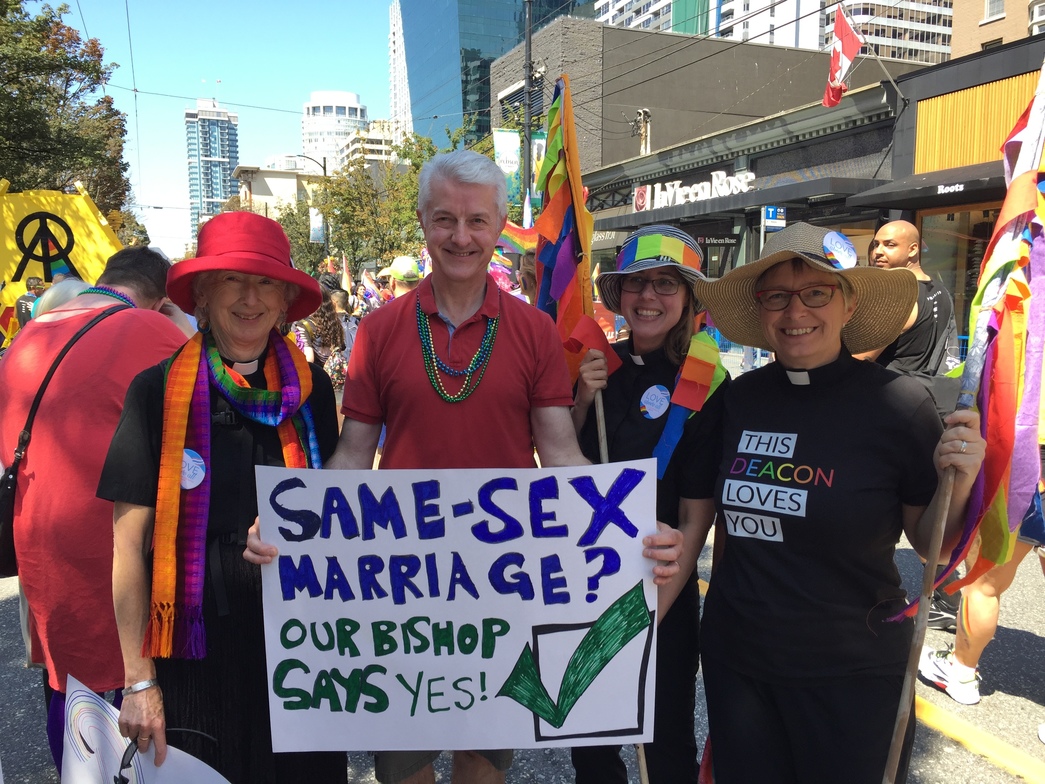 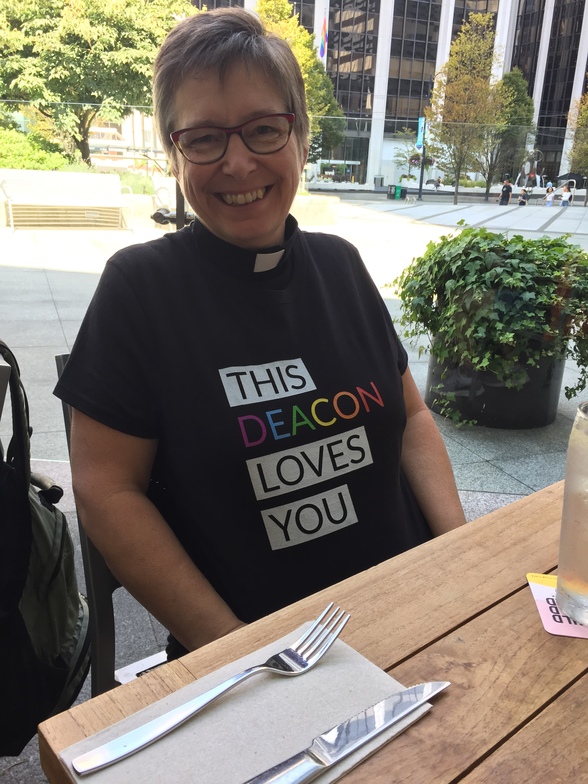 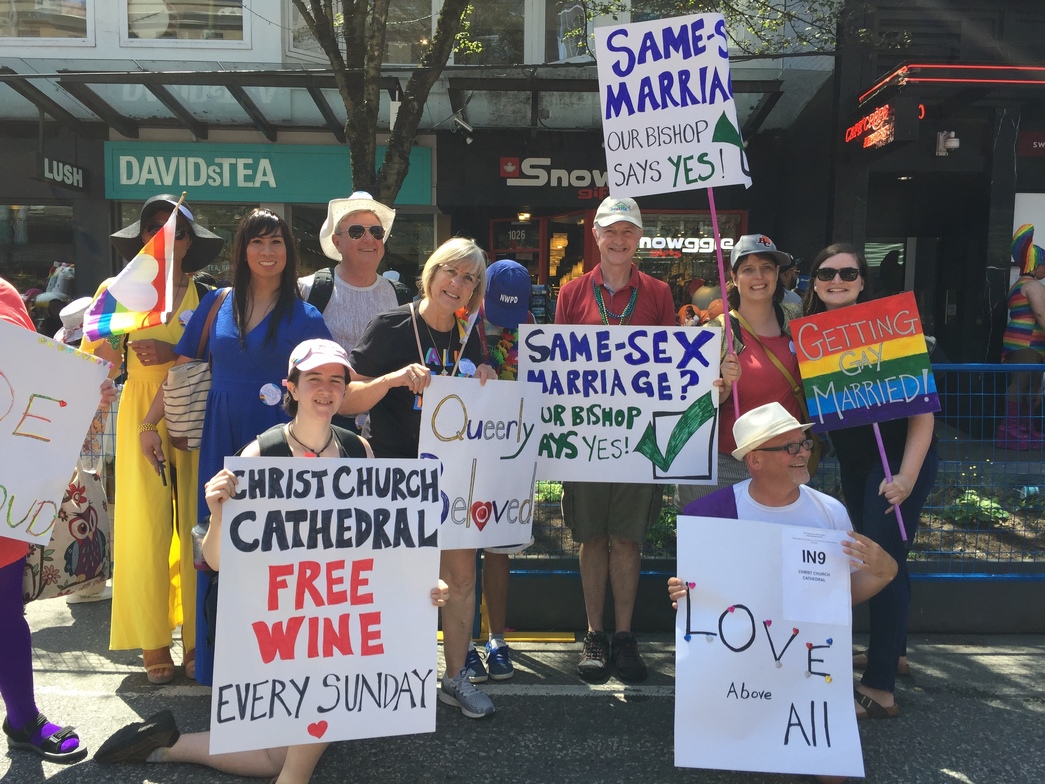 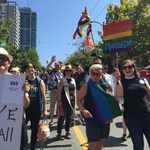 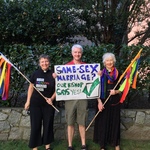 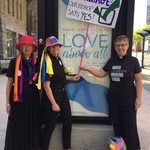 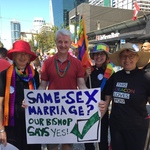 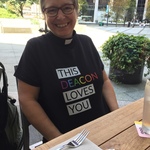 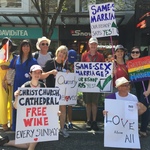 Paul Weir, Elizabeth Mathers, Alecia Greenfield and Peggy were happy to be part of the Anglican entry in this year's Pride Parade, and Peggy was deacon at the Cathedral's 8 a.m. Pride Service. This is Peggy's account of the Long Weekend Sunday event, as shared with our diocesan website:

Christ Church Cathedral provided the springboard for local Anglicans to become involved in the Pride festival on Sunday, and get involved we did!

In tandem with Dean Peter Elliott, Cathedral parishioner Peter DeGroot organized this year's Anglican entry in the Pride Parade and made it known that marchers from other parishes were welcome to join in. Peter DeGroot was also the server and leader of prayers at the Cathedral's 8am Pride Service; the Feast of the Transfiguration (transferred) was celebrated, with Dean Elliott presiding and the Rev. Alisdair Smith preaching. The service began with the rainbow candelabra being lit on the altar as we offered prayers of thanks for all God's beloved children and lamentations for the harms experienced by people of diverse sexualities and gender identitities.

The service was followed by an excellent breakfast supplied by Cathedral volunteers and a sign-making session in the parish hall, after which marchers found leisurely lunches in various places before gathering for the 1:30 "call time" on Robson Street. Our contingent of roughly 40 people was near the very end of the parade, and thus it was all the more amazing to witness the energy and enthusiasm with which we were greeted by people who had already been standing in the hot sun for hours. As a marcher, it was remarkable to witness the variety of ages and enthnicities in the crowd - Vancouver is truly a vibrant, multi-cultural oasis.

Our Anglican contigent experienced countless moments of mutual affirmation with the parade watchers. It was powerful to witness so many faces light up when they saw us coming - when people read our signs announcing Anglican pride or Archbishop Melissa's open door to same-sex marriage, when they saw someone in a clerical collar waving at them with a smile on their face, or when they noticed one of our same-sex couples walking hand-in-hand. Bystanders made a point of calling out greetings, clapping or waving madly in our direction, or even coming out of the crowd to offer a hug or high-five and say "thank you."

With hate and division on display in so many headlines and in so many corners of the world, it was a welcome relief to spend a day celebrating love, acceptance and belovedness. Any fatigue was well addressed by a stop at St. Paul's Open Church on the walk back to the Cathedral, where priests and parishioners had lemonade and iced tea available to all on the boulevard.

Thank you to Peter DeGroot for organizing the parade entry, the Cathedral and its clergy who came out for the walk or supported Pride Weekend and the SpiritPride conference in many other ways, and to all who took time from their Long Weekend to make sure the message "Love Above All" was heard on the streets of Vancouver.

The Cathedral's service bulletin on Sunday included an interesting timeline titled A History of Advocacy 1975-2019, making note of the Cathedral's journey toward full inclusion of all God's people. You can read that right here. It is clear that a huge debt of gratitude is owed to the Cathedral deans for their leadership in this area. As a diocese, we have been remarkably blessed by the work of Dean Herbert O'Driscoll, Dean James Cruikshank, and Dean Peter Elliott.

André's sermon for Easter Sunday Good Friday The Stripping of the Altar at St. Clement