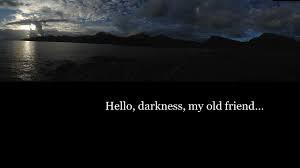 Hello darkness, my old friend/I’ve come to talk with you again/Because a vision softly creeping/Left its seeds while I was sleeping/And the vision that was planted in my brain/Still remains/Within the sound of silence

Do you recognize these words? A man named Paul Simon wrote these lyrics in 1963. He and his friend Art went on to record the song with acoustic guitar, releasing it on their first album. The album was a colossal failure and the duo split up. Paul returned to England and Art to America.

About a year later, producer Tom Wilson, a young African-American jazz musician, re-released the single this time mixed with drums and electric instruments. The song was an instant hit and the international sensation Simon and Garfunkel was born. (Apparently the duo had no idea their song was going to be re-released. Can you imagine waking up, you’re in one time zone, your bandmate in another, and you’re both hearing your song played on the radio?)

When asked what the song means or why he wrote it, Paul Simon has never really given a clear answer. He’s said the song is partly about his writing process, when he would go into the bathroom and shut off all the lights, to get away from all the noise and hear nothing but “the sound of silence.”

In other interviews, he’s said the song is about human relationships and the inability, at times, to communicate with each other. Garfunkel’s college roommate, Sandy Greenburg, writes in his memoir that he has always appreciated the opening lyrics, “Hello darkness my old friend” as an ode to Garfunkel’s friendship when he, Sandy, suddenly went blind at the age of 20.

Whatever the meaning behind the song, it is a beautiful piece of poetry: five stanzas, seven lines each, three couplets building to the climactic one-line refrain that comes around at the end of each stanza: “within the sound of silence.”

Now perhaps you're wondering what Simon and Garfunkel are doing in a sermon? When Paul Simon wrote the lyrics for “the sound of silence” he might as well have been remixing the prophet Jeremiah. In our Old Testament reading for this first Sunday of Advent, Jeremiah cries out to the people of faith in his community and says this:

The days are surely coming, says the Lord/when I will fulfil the promise I made to the house of Israel and the house of Judah/In those days and at that time I will cause a righteous Branch to spring up for David/ and he shall execute justice and righteousness in the land/In those days Judah will be saved and Jerusalem will live in safety/And this is the name by which it will be called/‘The Lord is our righteousness.’

Seven lines, three couplets building up to the climactic refrain: The Lord is our righteousness. This poetic structure will repeat itself over and over again throughout the book of Jeremiah.

We tend to read the prophets in the Bible as speaking of a time that is yet to come, some unrealized future that the prophet and the people are waiting for. But given the repetitious pattern that Jeremiah uses over and over again, we might consider if these words are not only a statement of unfulfilled waiting, something far off yet to happen, but a statement of expectant hope, a reminder of what the prophet already knows to be true: that hope is cyclical; that there is a seasonal nature to faith, a rhythm, an order to things; that waiting sometimes means having faith that whatever pain or suffering you're enduring in this moment shall pass, and whatever joy you are desperate to grab hold of will come around again.

In our Lynn Valley corner of the world, Advent always comes at the darkest time of year: it is cyclical. Sometimes this darkness is a recreative time, a welcome retreat into the quiet spaces of our lives. Sometimes this darkness marks a period of seasonal, acute depression—not so much an old friend but an uninvited guest that shows up every year during the holidays. Whatever the darkness represents to us this time of year, one thing we know for sure: it is repetitive; there’s a pattern to it; we expect this season to come around again and again. With hope and excitement, we cherish the time for re-creation; with fear and despair, we sometimes dread another season of sadness.

Just as this season of darkness is cyclical for us human beings, so, too, for our animal friends in the northern hemisphere. In her book, All Creation Waits, Gail Boss writes about the chickadee, which knows that the lack of light this time of year could mean starvation. The chickadee awaits the dawn every morning to gather up and store as much food as possible.

Similarly, the honey bee does not go dormant, but stays wide awake, clustered deep inside the hive, feasting on honey. While the garter snake searches out a den buried at least five feet below the ground, out of the frost’s reach. There the garter snake will cease all digestion, its body preserved somewhere between 37 and 39 degrees fahrenheit. Elsewhere, the black bear has fallen fast asleep, shedding weight while tiny cells within her womb grow into tiny bear cub paws.

These creatures reflect back to us so much of our Christian theology of darkness. Genesis chapter 1 says this: “In the beginning when God created the heavens and the earth, the earth was a formless void and darkness covered the face of the deep.” Creation is formed not from light, but out of darkness. Christ comes into the world, not from the heavens in a blaze of glory, but instead, from the darkness of a human womb.

At St Clement's, we have put forward a question for Advent this year. The question is “What are you waiting for in this season of wintry darkness?” As I begin to hear your reflections, I have been wondering if one of things we're waiting for is in fact something we know will come every year: that cyclical, familiar pattern of darkness then light; that cyclical, familiar arrival of the long-expected Christ, who was and is and is to come. Amen.