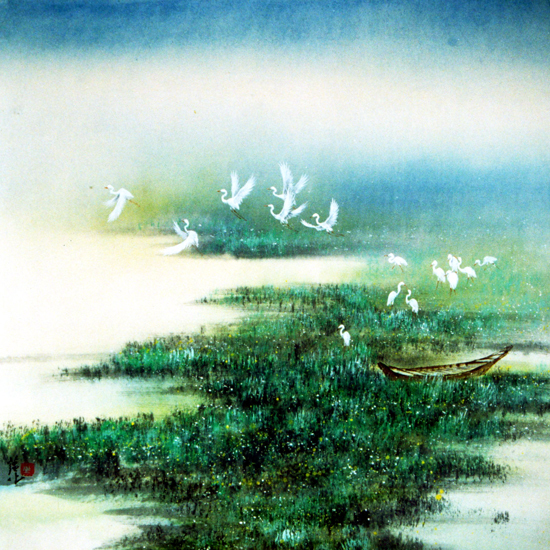 
G.K. Chesterton—the British author famous for the Father Brown detective series—in 1912 he wrote a book called Manalive. It’s about a man named Innocent Smith who is renting a room at a boarding house. One night the tenants learn that Smith has been brought up on charges of burglary, polygamy, abandoning his spouse, and murder. Rather than turn him in, the tenants insist on holding court at the house, putting him on trial with them instead.

Much hilarity ensues, and, spoiler alert, Smith “is revealed to be, as his first name states, innocent.”

It turns out that, on the charges of murder, he was simply firing bullets near people to scare them into feeling alive again; the house he breaks into is his own; and the women he ran away with are actually his wife, posing as a spinster in various disguises so they can re-enact their love affair.

As testimony is read out to the jury, a theme  emerges: Smith's longing to be home again. In one instance, an eye-witness named Wong-Hi, a temple keeper in the Forest of Fu, explains how Smith, when he spoke of eternity, imagined that even heaven would have elements of home.

“[I]f there be a house for me in heaven” he says, “it will either have a green lamp-post and a hedge, or something quite as positive and personal as a green lamp-post and a hedge. I mean that God bade me love one spot and serve it, and do all things however wild in praise of it, so that this one spot might be a witness . . . that Paradise is somewhere and not anywhere, is something and not anything.”

Like Chesterton’s Innocent Smith, I wonder if you, too, can imagine what heaven would look like if it were to feel like home? For me, it would be a place where, every time you turn the corner, there are Golden Retrievers  waiting for you. Heaven, for me, would have stores where, when you buy a box of chocolate chip cookies, you never come home to find that you accidentally bought the ones with raisins. It would be one traffic light after another turning green; hoar frost without the icy temperatures; crisp autumnal leaves crunching beneath your feet and then immediately returning to the trees. It would indeed be somewhere and not anywhere, something and not anything.

I wonder if the reason why the Christians in Corinth, to whom Paul wrote not one, but two letters, admonishing them to “be in agreement . . . united in the same mind and the same purpose”, I wonder if the reason they were fighting so much was because of people’s desire to feel at home? For church to be “somewhere and not anywhere”, for worship to be “something and not anything”? How difficult it must have been in those early days, to have such varied experiences of God and religion and to have to find some way of staying together.

“Has Christ been divided?” Paul asks them in his letter.

I think of the variety in Christian worship around the world today, the varied expressions even within the Anglican Church of Canada, the Diocese of New Westminster, the deanery of North Vancouver—our own Parish of St Clement. It helps me understand this variety just a little bit better when I see it as people simply longing for home. Perhaps those hymns or prayers or names for God that seem to me a bit “yikes!”—a burglary into my church!—perhaps these are in fact someone just trying to break into their own house? Perhaps there’s some way for all of us in the human family, regardless of church affiliation, to stay together?

Last week, Andi and I went to a lovely restaurant called Salmon and Bannock just over on Broadway and Oak. It’s a tiny place, and when we arrived, there was a table of 22 seated in the restaurant. We sat down sort of off to the side at our own table for two. Because we’ve been getting to know the staff there, at one point they poured some champagne and made an announcement to the whole restaurant, telling them that we had been married this past summer. We felt as embarrassed as we did spoiled!

A while later, someone from the other table wandered over and said hello. We asked her what the event was that they had gathered for. She told us that she was there with survivors and elders who had attended residential schools in Canada, to consult with the national team of archaeologists who were helping with the recovery of unmarked graves. We were stunned, of course, and felt incredibly fortunate to be meeting some of the individuals who are working on this project.

Later that night, I was at home scrolling through Facebook. I saw that a friend had posted a video of the press conference at Star Blanket Cree Nation in Saskatchewan where they had recently done one of these searches. I confess that I hadn’t really taken the time to learn what’s actually involved in these searches. But, because we’d met this group it prompted me to sit down and watch the report.

I learned that the scan revealed 2000 points of interest or anomalies on the old residential school grounds. The anomalies could be a rock, or hardened soil, or some other piece of earth, or they could be remains. The next phase is to take core samples from each of the points to further determine what lies beneath.

However, during the course of the scans, a security guard who had been working on the project, came upon a bone fragment that was lying just on top of the soil in one of the areas. And, they determined that it was a piece of jaw bone from a 4-year old child who would have attended the school in the late 1800s.

What had led the security guard to finding this fragment was a piece of advice they’d been given by some of the elders and the wisdom keepers. They had told them to “follow the gophers.” Gophers, when they dig their tunnels, anytime they encounter an obstruction, like a piece of animal bone, or, in this case, human bone, they push it to the surface to make way for their tunnels.

This was, of course, a harrowing and pretty incredible recovery that affirmed the stories that survivors have been telling for many years. The remains were present in a box at the press conference with plans to commemorate the child and bring them home. What’s more, throughout the report, the leader of the search acknowledged where different groups of people had been invited to join with Star Blanket Cree Nation in supporting their efforts. Groups like the provincial coroner’s office, the Roman Catholic Archdiocese of Regina, the Minister of Crown-Indigenous Relations—groups that you would be hard pressed to find seated in the same pew in a church in Corinth, or maybe even a church in North Vancouver.