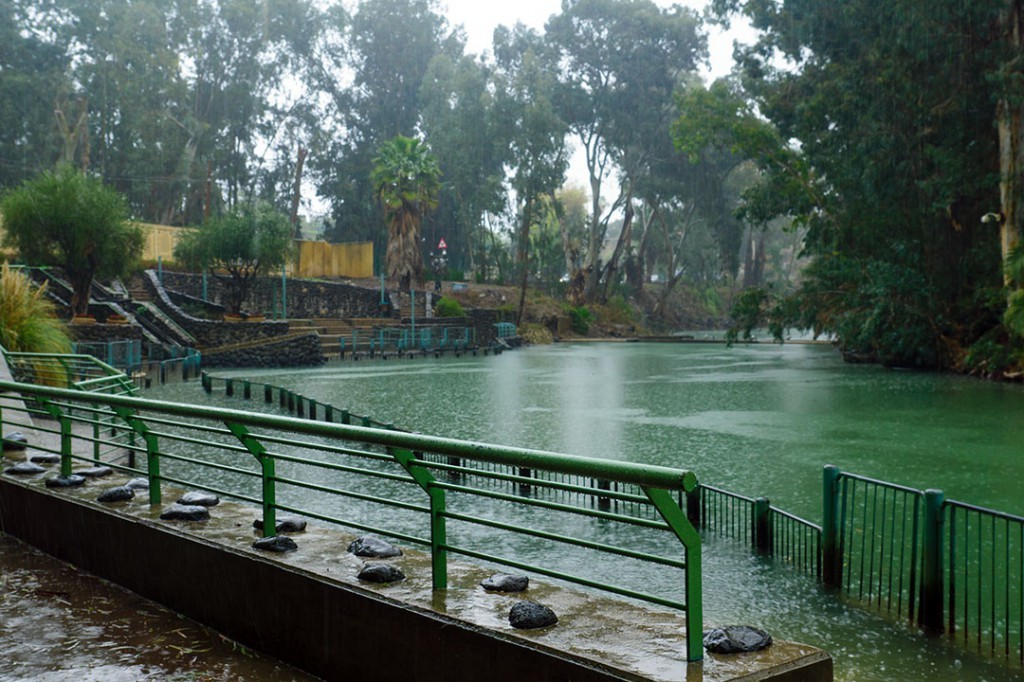 A mikveh is a ritual bath. It’s part of the Jewish faith. It goes back a long way. There are certain rules associated with a mikveh, a particular way of setting one up. The basin, the bath has to be connected to a natural spring, a living source of water like a river or a lake. You can fill it with rainwater, or melted snow, so long as the water got there by gravity and wasn’t, say, stored and purified and then carried in through pipes or pressurised taps in your home. The water in a mikveh has to arrive from the natural world, naturally, as it were.

What’s more, the mikveh must be carved out in the ground or as part of the foundations of a building. It’s not a bathtub. Or a jacuzzi. Or a swimming pool. There’s something distinct about it.

There are all kinds of reasons why, in Judaism, one would visit a mikveh. Everything from after handling certain foods to giving birth to converting to the Jewish faith; or, before a big Jewish holiday or a wedding. This one was really interesting: following a death, if you’ve been caring for someone as they’ve died or you’ve recently visited a grave, you might go to a mikveh and take a ritual bath.

In the Hebrew scriptures, what we call the Old Testament, the word mikveh is used to describe God as one who restores hope to Israel. Jeremiah chapter 17 verse 13 reads: “O Lord, the Hope (Mikveh) of Israel, all who forsake You shall be put to shame; those who turn away from You shall be written in the earth, for they have forsaken the Lord, the fountain of living water.”

It’s interesting, because for the longest time whenever I’d read about mikvehs, I was kind of bothered by the idea of a purification ritual, a kind of cleansing. It’s just always sort of bothered me that a religion would have this thing that you have to do because you’re somehow dirty from doing all of these things that are totally natural—like caring for a loved one who’s dying, or giving birth to a child, or handling food that you need for dinner. I didn’t quite understand why these things were seen as “impure”.

But, this last time I was reading about mikvehs, I came across a book from a Rabbi who talks about “our estrangement from the physical universe” how mikveh is about reconnecting with our physical selves in the natural world (and that this would be a holy act, a sacred ritual of reconnecting with the God who restores hope). We are so often doing everything possible to escape the physicality of our lives, to escape, perhaps the fragility of our bodies. Visiting mikveh is a way of acknowledging that there is a temporariness to these vessels; that nothing in life is guaranteed to work out as we might wish it to: not the way we look; not the way we grow and age; neither marriage, nor raising a child, nor sometimes even dinner.

So, why this talk of mikvehs on a day when we’re supposed to be talking about baptism? Namely, the baptism of Jesus? Well, some scholars believe that a mikveh is what Jesus went to John the Baptist for that day. It was a normal part of their Jewish faith, though John’s baptism had an added twist of being “for the forgiveness of sins.” Knowing that Jesus was being talked about as the Messiah, one who in Christian thought is “without sin”, it was strange for John to think that Jesus would need to take part in any kind of purification ritual. John ought to come to Jesus for mikveh, not the other way around!

But, here we have Jesus showing John and all those gathered at the Jordan that day, the importance of reconnecting our physical selves with the natural world. In his baptism, Jesus affirms for the disciples that God’s Son, God’s beloved, isn’t estranged from the physical universe; he is as connected to it as the water in a mikveh is to a river.

Of course, there are all kinds of ways that the Christian practice of baptism parallels or maybe borrows from the Jewish ritual of mikveh. Baptism is the primary ritual for conversion into the Christian faith. Infants are often baptised following childbirth. At St Clement’s, we have a custom of collecting water for baptism from the creek behind the church, from a natural source. And, it’s the practice of some to visit a baptismal font and to dip your fingers in and make the sign of the cross when remembering a loved who has died, or when simply wanting to offer a prayer for strength when everything’s just not quite okay.

In the Anglican Church, we say that baptism is indissoluble. It can’t be undone. When Jesus emerges from the water at his baptism, there is a voice that comes from heaven saying, “This is my Son, the Beloved. With him I am well pleased.” In one Greek manuscript of this story, Jesus is called God’s “adopted” Son, the storyteller wanting to make a point that God truly welcomes all into their family, not just those who come by it naturally.

Jesus’ baptism is both a statement of his full divinity and an affirmation of his full humanity: the indissoluble promise that because of Jesus, nothing in this life can make you unlovable to God. Amen.