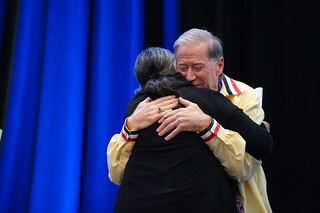 The week-long, triennial gathering of the national General Synod concluded on Tuesday evening, and there was much to celebrate during its closing banquet.

The Anglican church has, since its inception, striven to create space for diversity in theological thought and expression. Tensions are, at times, inevitable as people struggle to accommodate differences between them, but this past week was significant for its respectful communication, expressions of compassion and hope, and a shared commitment to walk together in mutual friendship as we explore what God calls each of us to be within our own lives, cultures and communities.

The following outcomes of General Synod are among its historic highlights:

More in-depth Synod news can be found here on the national website, and on the Anglican Journal's news page. Videos, presentations, and exhibit booths were rife throughout the week, and together attested to the passionate, dedicated ministries of the Anglican Church of Canada. The spirit was at work in Vancouver this week!