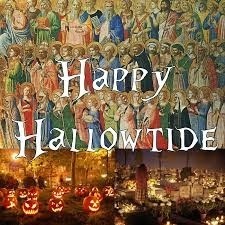 Happy Halloween! I've seen some great costumes out there already: I saw a couple of people dressed up in shadow clone jutsu. One of our youth was talking about her Shang-chi costume a couple of weeks ago. On Friday, I saw a kid walking home from school dressed up as his dad. It was really clever!

Halloween is known as Allhallowtide in the Christian faith. All Souls and All Saints, these two important rituals that fall during the time of Halloween. It’s a time in the church year when we especially remember the dead. It’s a time when we celebrate one of the central tenets of the Christian faith: that death does not have the last word, that the lives of those we love whom we see no longer go on to eternal life.

I’ve always sort of had a soft spot for Halloween. I know that's not the case for everyone. Some of us were taught to be afraid of Halloween growing up. But because All Souls and All Saints are such important days in the Christian calendar, I wonder if we might see it as a time of creative engagement with the shadow side of life, which we call death?

I don't know about you, but growing up there was always that house that went all out. They would build a haunted villa, and once you'd made your way through, you'd get a full-sized chocolate bar! You know that house, hey? And remember what people were doing last year with all of the Covid-19 restrictions? Some houses had these elaborate slides, a tube of toilet rolls taped together and they'd slide the candy down to the kids. Others were a little less creative and were just kind of launching candy from their balconies. It was a good time!

I read an article this week from the SALT project titled, “A Brief Theology of Halloween.” This the bit that really stuck out to me:

[A]t its best, [Halloween is] a magical, playful night of community-building and neighborhood-making. From this point of view, we might even call it a sacramental glimpse, if only for one night, of how the world is supposed to be: homes decked out in mischievous fun, doors opened to visitors of all ages, a spirit of wit and excitement in the air, and simple, sweet gifts given to children — all children, not just “our” children! — dressed up as heroes and villains alike. . . .[W]hen else do we intentionally spend this kind of time together as a community? When else do we do something as a neighborhood that’s this intergenerational? . . . . And when else are so many gifts given out — often by strangers, to strangers — just for the sake of delight?

“When else are so many gifts given out — often by strangers, to strangers — just for the sake of delight?” (When it otherwise doesn't really make all that much sense!). This is the question I’d like us to consider this morning, as we look at two hallowed lives from the Bible: Naomi and Ruth.

Naomi arrives in Moab with her husband and two sons. They are refugees; they have left their home country because of famine and political turmoil. Naomi's husband dies soon after they arrive in Moab. This has a considerable impact on her and her sons and their ability to survive in a foreign land. Her sons take Moabite wives: Orpah and Ruth. (And the marriages really are just that: the sons taking the women. It's important to recognize this, I think, for the sake of Orpah and Ruth and the women around the world forced into marriages everyday. It's important also to remember that this is Naomi and her sons, their way of establishing themselves in Moab now that dad is gone. They are without their patriarch in a time when patriarchs are really important).

Some time goes by and soon it is the country of Moab that is struck by famine. Naomi’s two sons die and she and her Moabite daughters-in-law are widowed. Naomi, Oprah, and Ruth are now in the position that so many modern-day refugees face, of needing to flee the country.

Naomi decides that she will return to her home; she's heard that things are getting better there. But Ruth and Orpah are trying to go with her. There's some debate in Biblical scholarship about whether or not Naomi wants them to go with her. Let's face it: her family back home is likely more able to take in one widow as opposed to three. What we know is that Orpah decides to return to her own family, but Ruth, the heroine of our story, goes with Naomi. The text literally says, "but Ruth clung to her.” And here’s your fun Bible fact for the day: the word “clung” is the same word we see in the Creation story in the Book of Genesis--- “Therefore a man leaves his father and his mother and clings to his wife, and they become one flesh.”

It’s the same word used in the Book of Deuteronomy about the commandment to “Love the Lord your God with all your heart, soul, mind, and strength”. To follow this commandment is to “cling” to God.

Ruth clings to Naomi like a man clings to his wife in marriage. Ruth clings to Naomi, vows to love Naomi's God with all her heart, soul, mind, and strength. The two women, who without Naomi's sons are effectively strangers, they have nothing to gain from fleeing the country together. Yet, they choose to do so anyway. And thank God they do, Christians would say, because it's through Ruth's line that Jesus is born.

Two stories come to mind whenever I hear this remarkable passage. First, a refugee I knew growing up. She had come to Canada with her daughter-in-law, but without her son. Her son was serving a mandatory military term in their home country. If he attempted to leave, he would be imprisoned. So, it was the mother-in-law and the daughter-in-law who came together. You can imagine how difficult it was for both of them to make that journey and for the son not to join them for another 20 years.

The second story that comes to mind is of two women who immigrated to Canada from the Philippines. At their request, the church where I was serving at the time held a blessing of their marriage. The congregation had never seen the women in church, but they showed up for the blessing anyway. The text that was read for the ceremony was from the Book of Ruth:

Where you go, I will go; Where you lodge, I will lodge; your people shall be my people, and your God my God.

Strangers offering hospitality to strangers when it makes no sense to do so is the point not to be missed in the story of Naomi and Ruth. Gifts given by strangers to strangers is the joy not to be missed on Halloween. Perhaps as we’re celebrating Halloween tonight, “homes decked out in mischievous fun, doors opened to visitors of all ages, a spirit of wit and excitement in the air” we can imagine what it would look like for our church and our homes and our hearts to open up even more to this kind of hospitality year round.