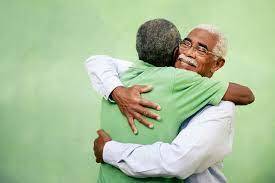 Let’s say St Clement’s is putting on a play called, “The Parable of the Prodigal Son.” On this “stage” right here, we’ll bring to life the timeless story, which begins, “There once was a man who had two sons.”

Throughout the course of the play we’ll learn about the younger son who pushes for an advance on his inheritance only to squander it all away. When he returns home, the audience expects he’ll be thrown out. But there’s a twist: he is received by his father with open arms; a feast thrown in his honour. All the while the older brother sits seething in the corner.

You, dear congregation, are asked to cast yourselves in this story. Which character will you play? Will you play the parent? The older sibling? The younger child?

In her commentary on the story of the prodigal son, Palestinian Christian and pastor Niveen Saraas points to the shame/honour culture that sets the scene for this story. She says that any child who came to their parents asking for an advance on their inheritance may as well have been saying to them, “I wish you were dead already!” So begins the scandal and offence of the younger son’s request.

Then again, it's surprising that the father says, “yes”. As listeners we are left to rationalise the father’s decision. Perhaps he gave the money to his son so that he could go off, like so many immigrant children do, to work in a foreign country, build a life for himself, and send money home to the family? The younger son does no such thing, however: choosing instead to spend away his inheritance on nothing of any lasting value—never mind anything that would benefit his family.

Soon enough the young son returns home—a complete and utter failure. It’s maybe not that hard to imagine the feeling of disappointing or embarrassing your family, especially your parents. And, perhaps it’s not all that far fetched to imagine being the parent who wouldn't want to be seen as enabling their child’s poor choices, while at the same time experiencing utter and complete relief that at least your child came home.

The father runs to his son, embraces him, and orders a feast in his honour. Niveen Saraas says that the most shocking part of the father’s response is the fact that he runs to embrace his son. In Jesus’ culture and her own, it’s very undignified for men, especially men of an upper socio-economic class, to run, lest they appear harried or harassed. (Funnily enough that same excuse doesn’t work when my partner wants me to go for a run and I tell her running is a very undignified activity).

The elder son is left fuming in the corner at the counter-cultural reception thrown for his younger brother. The father pleads with him to join in the celebration—“all that is mine is yours” he says, as if to say that the willingness to forgive—not the money—is the true inheritance he wishes to pass on to his sons.

So why does Jesus tell this parable?

Throughout the gospel of Luke, Jesus’ ministry is very much focussed on turning upside-down the currencies of his day: whether it’s the economic currencies governing the wealthy and the poor or the social currencies that get you privileged access and status. In the parable of the prodigal son, Jesus reminds his community about the currency of radical forgiveness, which upends the economy of shame and honour of his time and ours.

Now, we are sometimes tempted to think that Jesus introduced the concept of radical forgiveness, that this was the first time his community was hearing about it. In fact, Jesus is reminding them where it is already woven into their history. It’s no accident that Jesus tells the parable of the prodigal son to Pharisees and scribes, leaders in the Jewish community, who would have been familiar with many stories of fathers and sons, of brothers at odds with each other. Think Cain and Abel, Isaac and Ishmael, Jacob and Esau, Joseph and his brothers. Further, it’s no accident that at the end of Jesus’ parable he will relate the prodigal son to being “lost and now found” a reference to Jesus’ earlier parable of the woman who turns over everything in her house in search of a lost coin, a parable with a female protagonist very much in the Jewish tradition of the stories of Ruth, Esther, and Judith which the Pharisees and scribes would have known well.

All of this is to say, in the words of Jewish scholar Amy-Jill Levine, that Jesus’ “parables more often tease us into recognizing what we’ve already always known . . . . The point is less that they reveal something new than that they tap into our memories, our values, our deepest longings, and so they resurrect what is very old, and very wise, and very precious.”

The parable of the prodigal son gives us at least three entry points from which we can prayerfully consider this in our own hearts. So, I ask you again the question I posed at the beginning of this sermon: if you were to cast yourself in this story, who would you play? The father, the older brother, the younger son? No one role is better or more righteous than the other. Each helps us to consider God’s economy, God’s currency in contrast to our own, from the perspective of one who feels ashamed and a failure; from one who feels abandoned and wronged; from one who might be inclined to treat a family member or friend with the measure of wrongdoing they have done unto others.

Jesus and his ancestors teach us the way of prodigal love. Where on that path do we find ourselves this day?

Niveen Saraas, “Commentary on Luke 15:1-3, 11b-32” accessed online at https://www.workingpreacher.org/commentaries/revised-common-lectionary/fourth-sunday-in-lent-3/commentary-on-luke-151-3-11b-32-5