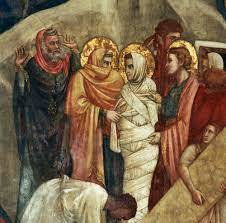 “The dead man came out, his hands and feet bound with strips of cloth, and his face wrapped in a cloth. Jesus said to them, ‘Unbind him, and let him go.’”

If we can place ourselves for a moment in Jesus’ time and place. It is the first century, in the Holy Land.* Imagine that an elder in the community has died, perhaps quite suddenly and unexpectedly. The custom when a person dies is for the immediate family to gather. They remove the clothes from the body of their loved one, wash and anoint them with oil and perfume. They bind the body in strips of cloth and from there, the body is moved from the family home to the family tomb. The family processes through the streets. They stop along the way to lament: prayers are offered; people grieve, openly.

Once at the tomb, the body is laid and jewellery, combs—sandals belonging to the deceased are placed next to them. Outside the tomb there is bench seating where extended family will visit and offer their condolences. For the next seven days, the immediate family will travel only between the family home and the tomb. It’s during this time that Mary and Martha will see Jesus and speak with him. It’s Mary, who we hear from in our gospel reading today. She leaves the family home and goes out to meet Jesus—not at the tomb, but elsewhere. It’s unusual for her to break with ritual, which should tell us something about what Jesus means to her.

When Mary sees Jesus, she informs him that Lazarus has died and all of the very human responses to death come out: there is disbelief (he can’t really be dead, can he?); there is deep sadness (we are told, in the shortest sentence in the Bible, that when he learned that Lazarus had died, “Jesus wept”); we see bargaining and I think, even anger (Mary and Martha both cry out to Jesus on separate occasions, saying, “Lord, if you had been here, my brother would not have died.” [Where were you?]).

One of the things I find most profound about this story is that the language that’s used to describe Lazarus’ preparation for burial is the same language used when Joseph and Mary wrap their newborn baby, Jesus in bands of cloth and lay him in the manger. There is some foreshadowing here: the manger and the tomb, the writer of this story wanting us to know that Jesus’ birth is tied to his death. There’s also something important being said about the Christian theology of life and death: that, even as we die, we are born to new life. That, even as Lazarus’ body is wrapped for burial, he is at the same time wrapped and swaddled for new life.

This Sunday is the day in the church calendar we call All Saints Day. It’s the time when we recognize the life and afterlife of all the saints: of our patron saint Clement; of St Mark, Matthew, Luke, and John, the writers of the gospels; of St Hildegard, Julian of Norwich, Oscar Romero and other giants of the faith. All Saints is also the time when we remember ordinary, everyday saints: family members and friends who have died, the souls of those we love but see no longer, who have no more pain or suffering, but life everlasting.

Jesus says to the family of Lazarus, who has died and been raised to new life: “Unbind him, and let him go.” I wonder what it looks like to hear Jesus saying these words to us today?

Maybe for you it’s:

“Unbind the expectation to be over it by now. Let it be.”

When we talk in our culture about death’s grip, I imagine all of the things we do to bind our hearts when we’re grieving. This binding is important—necessary. Like a wound that’s wrapped in cloth, it’s what helps us to heal. And, there comes a time when we remove those cloths, release death’s grip, so that those wounds can breathe. Jesus speaks to the saints of ages past, the saints of recent memory, and the saints—us—here today, and he says not to give death more power than it’s owed. He reminds us that life follows death, that the manger and the tomb, birth and death, are tied together. He says of death’s grip: unbind it, and let it go. So may it be.