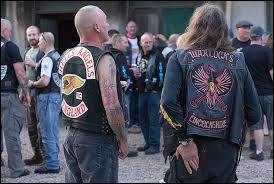 A grandparent was tucking their grandchild into bed when the child asked, as they so often did, for the grandparent to read them a story.

“Tell me the one about the biker!” the child said.*

The grandparent folded their hands and leaned in, eyes gleaming. They, too, loved this story.

“There once was a successful young man” they began, “who took his new Nissan Maxima to the mall to buy his girlfriend a present. He had heard on the radio that his usual route was closed off, so he decided to chance it, and take a shortcut through a bad part of town.”

“As he drove down, clusters of motorcycles and what he had always been taught were ‘suspicious looking vehicles’ began to appear.”

“At a red light, the young man stopped, and found himself suddenly in the middle of a gang war. The gang member from one group took a shot at his rival, across the street. The young man in the Maxima was caught in between. The bullet hit his shoulder, and he cried out in pain.”

“He got out of the car, intending to get help, but in his weakened state he attracted the wrong kind of attention. A couple of people desperate for some quick money took notice. They saw his car with the keys still inside close by. They put the two together and soon, the young man was out of a car, a cell phone and a wallet.”

“By the time they were gone, the young man was in rough shape. He lay smashed and dirty on the sidewalk. He laid there for what seemed like hours, but it was only a few minutes. He was thrilled when he looked up and saw a priest from his local church walk by.”

“‘Help!’” he cried out, feebly, but the priest crossed over to the other side of the street and did not even look his way.”

“The priest did not usually walk this way, but she was on her way to Parish Council. She, too, had been running late and had decided to take a detour through town.”

“She had stopped for gas when she saw the young man. Who knows what that man had been taking in order to be that intoxicated? Often these people were dangerous, and unpredictable. Just for security's sake, she crossed over to the other side of the street. She was already late for the meeting, and she didn't want any complications.”

“‘I'm sure the police will deal with him,’ she thought.”

“A half hour later, a very faithful church-goer walked by. He was carrying an agenda for the Parish Council meeting he was on his way to attend. He, too, had been late and decided to cut through town to make up time.”

“The injured young man thought for sure this man would help him.”

“But, the faithful church-goer knew about this part of town. He’d seen everything decline in the last decade. What had once been a hard-working population had been overrun by sex workers, pimps and drug addicts. Every day, he heard of more horrors on the news. He had once been proud to live in this city, but no longer.”

“Seeing the young man, he thought about the way the country was going, and hurried on.”

“Just as he was about to lose consciousness, the young man caught a glimpse of another man— this one was wearing a jean vest and his arms were covered with tattoos. He would have been afraid of this biker under different circumstances, but he had no fear left now.”

“‘I wonder what kind of bike he rides,’ the young man thought to himself.”

“The biker had parked his Harley-Davidson and was on his way to the bar when he noticed the young man. Feeling sorry for him, he went over.”

“‘Not really,’ the young man replied.”

“He used his cell phone to call 911, waited with the young man until they arrived, and paid the ambulance driver the $500 fee.”

“‘Take my cell,’ he told the young man, ‘and use it to call your parents and your girlfriend. Tell them where you are. And here’s a couple hundred to tide you over until you get your I.D. replaced. Sorry for what happened to you.’”

Of course, the child told the story of the biker. Only this time, they included a detail, which, for years, their grandparent had always left out.

The grandparent was a retired police officer who had specialized in drug trafficking. The biker in the story wasn’t just any biker. He was the head of a drug ring who would eventually shoot and kill the police officer’s partner in a raid.

When the child was just a little bit older, the grandparent had told the child the true identity of the biker.

“But Oma!” the child had cried.

“How could you tell a story and cast your enemy as the one who showed mercy?”

“Because” the grandparent replied, “when you ask yourself ‘who is my enemy?’ you will have the answer to the question, ‘Who is my neighbour?’”

Casting the biker as the Good Samaritan and telling the story over and over again was how the grandparent had stopped from giving herself over completely to hatred and despair in the years following her partner’s death. She wasn’t sure she'd ever be able to forgive the man, but she wasn’t about to let the same fear and violence swallow her up.

When the lawyer in our gospel reading today asks Jesus, “Who is my neighbour?” and Jesus replies by telling him a story about the lawyer’s arch nemesis, a Samaritan, acting with compassion and mercy, Jesus is telling the lawyer how to stop evil from taking over your life in the face of unfathomable pain.

So, today I ask you not, “Who is your neighbour?” as we are, perhaps, used to asking when we hear this story, but instead, “Who is your enemy?”

*While this story is my own, I did adapt and borrow some elements from Sharilee Swaity, “The Biker: A Modern Day Version of the Good Samartian Parable” accessed online at https://owlcation.com/humanities/The-Unscrupulous-Lawyer