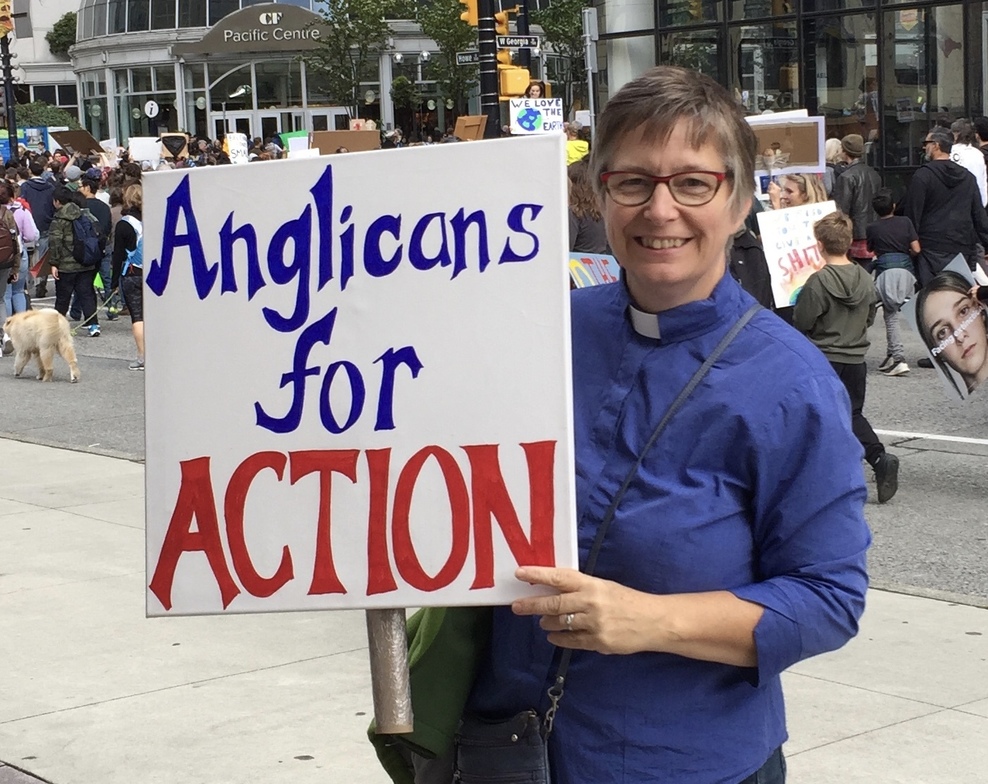 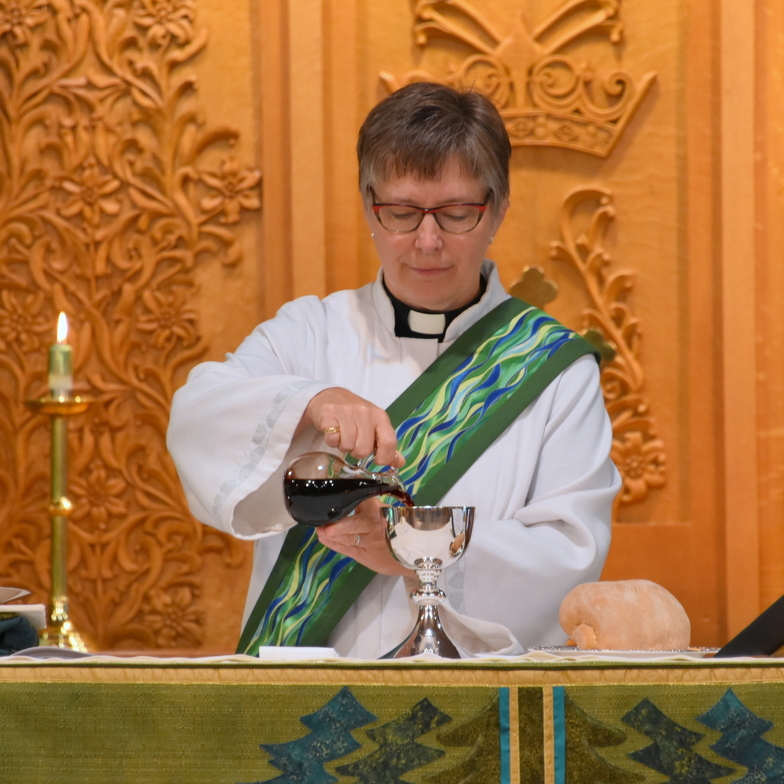 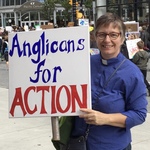 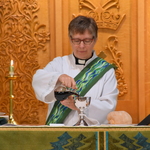 As we were in the vestry robing up for service on a recent Sunday, André said "Hey, would you mind writing something for the newsletter about the diaconate? I think there are some people who don't fully understand the role of a deacon." He casually continued to vest, merrily unaware that he had just handed me rather a daunting task!

There are many people who don't understand the role of a deacon (some deacons included, perhaps!) That is in large part because the role has changed over the centuries. As we know from the beginning of Acts 6, the first deacons were seven men "full of spirit and wisdom" who were chosen to distribute food and practical aid so as to free up the 12 apostles to focus on spreading the good news of Christ. Stephen, one of these seven, was the first martyr of the Christian church and is remembered on St. Stephen's Day, otherwise known as Boxing Day.

Over the decades that followed, both male and female deacons had a robust ministry serving the needs of those in their faith community and acting on behalf of the bishop. Priests, or presbyters, came later. As Ignatius of Antioch stated around 100 AD, the deacon’s task was to continue “the ministry of Jesus Christ … the deacons represent Jesus Christ, the Bishop represented God and the presbyters the council of the apostles."

By the mid 5th century, however, one aspect of a deacon's role became emblematic of the whole. The deacon's task in serving at the table in preparation of the Eucharist was emphasized, with one effect being that people began to view deacons as assistants to the priests. The other aspects of their ministry - baptizing, charitable works, teaching and preaching - declined. As you will see in this short timeline, the diaconate largely became just a stepping stone on the way to the priesthood, a tradition that still continues with would-be priests first being ordained as a "transitional deacon."

However, the "vocational" or "permanent" diaconate never entirely disappeared, especially in the Eastern church. And in the Western church, the role of the deacon as a "full and equal" order has once again emerged in many jurisdictions, once again emphasizing the deacon's task to be a bridge between the church and the world it is meant to serve.

This journey has not proceeded at the same pace and in the same manner in every country and diocese in the Anglican Communion; in the Church of England, for example, the role of the deacon became entangled with the reality that women were not allowed to become priests - they could, however, be made a "deaconess." With the ordination of women to the priesthood beginning in 1994, however, work began on renewing the permanent diaconate as a distinctive order of men and women, one intended to be seen as different but not inferior to the priestly order.

Deacons thriving in the DNW

In the Diocese of New Westminster, we are fortunate to have a well-established and ever-growing community of deacons, thanks to the work of committed Anglicans who envisioned what a fully restored diaconate could bring to the ministry of the church. In fact, this year marks the 25th anniversary of the ordination of deacons in the Diocese of New Westminster (one of the bright spots in 2020!) Archdeacon Bruce Morris, the Archdeacon for Deacons who shepherds our diaconal community, wrote about this milestone earlier this year.

Archbishop Melissa has been a strong supporter of the diaconate in this diocese and continues to honour the special relationship between deacon and bishop that was present in the earliest years of the Christian church. On Saturday, she and Bruce hosted our annual Deacons Day, a day on which we learn together, find out how people are exercising their ministry, and derive mutual inspiration as we see the impact deacons are having in all corners of the diocese. Currently there are nearly 40 deacons active in ministry, with more discerning a call to ordination.

This year's event had to be conducted via Zoom, but that didn't diminish the experience of hearing presentations from, and discussing interesting topics with, other deacons from throughout the diocese. Many deacons are in the paid workforce and can offer immense expertise in organizational behaviour, teaching, counselling, community services, non-profit management, community agriculture, corporate leadership and more, as well as a range of hands-on practical skills.

A diversity of deacons

So "What does a deacon do?"  is not an easy question to answer. Harkening back to Ignatius, we are intended to represent the ministry of Jesus Christ - no small feat! Each of us in our own way continues to learn what that can mean in our own context and set of circumstances. While a deacon's liturgical function is visible and easily identifiable - we proclaim the gospel, assist at the Eucharistic table, and send people out in the world to be God's heart and hands - individual deacons will find different ways of exercising their ministry the other six-and-a-half days a week. It might be through their paid work, as a volunteer in a helping ministry, or simply being a joyful spirit commited to bringing hope to dark corners.

One basic expectation, however, is that deacons represent the gospel message in the world, and - just as important - that they bring the needs of the world back to the church. We are to "comfort the afflicted, and afflict the comfortable" - that is, we are to be an ongoing reminder that our church isn't fulfilling its Maundy Thursday mandate unless we are seeking to "love our neighbour" in a way that makes a positive difference to the lives of those around us.

Our journey together - yours and mine

Part of a deacon's formal discernment journey is to work with a group of wise parishioners who gracefully challenge the candidate's sense of vocation. In my case, Sally Hinnell, Wilna Parry, Hannah Greenfield, Ian Gunn, Kath Biebrich and I met almost a dozen times over the course of several months and enjoyed a rich conversation each time.

But it's not just the candidate who is on the hot seat - all the participants in the discernment group consider their own gifts and ministries as they learn more about what qualities are particularly important in ordained leadership. Finally, the group must decide not just if the candidate is suitable to move forward in their discernment, but if the parish would be willing to accept the candidate as their deacon - with all that may entail. Because part of having a deacon is understanding that you may be "afflicted" on a regular basis!

If I am too often prodding you to donate time, talent or treasure to those outside our walls, please forgive me. It's my job, but I probably don't always do it gracefully. If I am not prodding you as often as I should, please forgive me. Let's learn together how to be more compassionate, committed, and innovative as we seek to embody the love of Christ in the wider community.

And if you might be hearing a call to diaconal ministry, please don't hesitate to listen! Any of your clergy would be happy to discuss this with you, and there is lots of information here on the diocesan website. I can assure you, there's no life like it!

Next week we'll hear from Elizabeth on her life as a deacon.