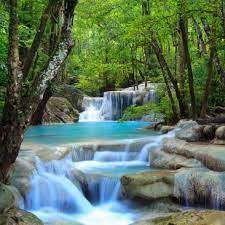 Last weekend, I was sitting outside in the garden next to the creek here behind St Clement’s. I was there with some folks from St Clement’s as well as some members from other churches across the Lower Mainland. We had come for a half-day garden workshop.

During the workshop, Indigenous herbalist Leona Brown* was teaching us about some of the healing ointment she makes from local plants. She told a story about using some balm to help her daughter's arthritis. The medicine would prickle and sting when applied to an unaffected part of her daughter's body. But, when it was applied to the injured part, it felt soothing and brought much relief.

Leona said to her daughter, “Of course it feels soothing where it hurts, because that’s where you need it!”

We have some very interesting Bible readings this morning, all of which in one way or another have to do with healing. In the gospel reading, Jesus sends out seventy-two of his followers to “heal the sick.” Unlike Naaman in our Old Testament story, who takes with him ten talents of silver, six thousand shekels of gold, and ten sets of garments, Jesus’ followers are told to take nothing—no bag, no purse, no sandals. This is for three reasons: first, so they can encourage the hospitality of those they visit; second, so they don’t get robbed along the way; and third, as a sign of the kind of healing Jesus is seeking to bring about in the world: a healing that can’t be bought (or sold), a healing that is freely given.

In our second reading from Paul’s letter to the Galatians, the theme of healing is maybe a bit more abstract, not as obvious. After Jesus has died, been resurrected from the dead and has ascended into heaven, his followers continue to gather for worship and fellowship. It’s an incredibly dangerous time. Many of Jesus’ followers are Jewish and many are Gentile. Some of the Jewish followers are saying that the Gentiles really ought to get circumcised, so that if the authorities find them, they won’t find a mixed-group of people but will instead presume they are all Jews. The authorities are on the lookout because Jesus’s message is bringing together huge numbers of people from across religious and ethnic borders. Without segregation between Jew and Gentile, a kingdom more powerful than Rome could be built.

Despite this very practical desire for safety, Paul discourages the idea of circumcision for all of Jesus’s followers. The message this mixed-gathering gives to the wider world is powerful: there is no mark, no skin-colour or gender or body-type that says you’re in or you’re out. God’s household, God’s healing  in the world, knows no one religion, race, or ethnicity.

Finally, in our first reading, we have a story about a successful army commander who comes down with leprosy. He is healed through a prophet from a rival nation (which just so happens to be the hometown of the slave-girl captured and given to the commander’s wife). One of the things I love most about Old Testament stories is that there are all of these impressive men who are named and memorialised for their accomplishments (and rightly so) whether it’s a spectacular fall from grace or an epic rise from the ashes (King David, King Solomon, the prophets Isaiah, Elijah, Elisha). Yet, it’s often the unnamed woman in the story who puts God’s healing power in motion. How about that?

Today’s story is no exception: the unnamed slave-girl, the servant of Naaman’s wife, she’s the one who knowing that Naaman has contracted this terrible disease says to her mistress, “Say, I know a guy back home in Samaria.”

Naaman goes to Samaria. When he arrives and the prophet Elisha tells him to bathe in the waters of this foreign land he refuses. He’s brought with him scores of wealth; he’ll pay a good price; the prophet ought to heal him on the spot, or, at least in his home waters—there’s plenty good water in Damascus, after all. The thought of being healed in that river stings and prickles in Naaman’s mind. But, when Naaman finally agrees and bathes seven times in the river Jordan, the river which borders the homeland of this slave-girl and the same river in which Jesus will one day be baptised, when Naaman bathes in this healing river his wounds are soothed.

I wonder if you have ever experienced healing in a place you didn’t expect? I remember when I was coming out to some friends and former professors from the Evangelical Christian College where I completed my pastoral ministry degree. I had written a letter to them and explained that I had come to a deeper, more genuine understanding of my sexuality. I told them it wasn’t within the boundaries of human sexuality set by the Evangelical way. I told them I was “gay”.

I remember the responses to that letter. There were some who were thrilled and there were some who were scared, confused, disappointed, and pleaded with me to “repent and return home”—there was plenty good water in Damascus, after all. But, it was the water I had been called to outside my hometown, as it were, where I had experienced this coming home to myself. That it was outside, that it didn’t bear the mark of what I knew or what they knew, I think this is what made it so difficult to accept.

I wonder sometimes what it must have been like for Naaman to return home, glowing, no longer with sores on his arms or his face, and to have to tell his community that he was healed in a place that was so totally other to them and by a prophet who was a relative of this slave-girl? I think one of the most difficult things we grapple with as communities of faith is when our own find healing elsewhere. It shakes our understanding of who has ownership of the truth, who has the power to heal. Everything we thought we knew about God is broken wide open. One of the most difficult things we grapple with in our own personal journeys, is when we find healing in places where we’ve always kind of gone, “I think I’ll wait until I get home, thanks.”

There is no one mark of healing, no one way or place that healing takes place. Healing sometimes happens in the places we least expect, or maybe another way of putting it is that healing sometimes happens in the places we feel most ‘other’ (most out of place). And, we know when we have experienced healing because our wounds, whatever they may be, are soothed. How will we respond when we are brought to unfamiliar waters and God says, “Wash and be clean?”

*You can learn more about one of Leona Brown's latest projects, the Running Free Wildflower Memorial Garden, here:
https://runningfreewildflowergardens.mystrikingly.com/