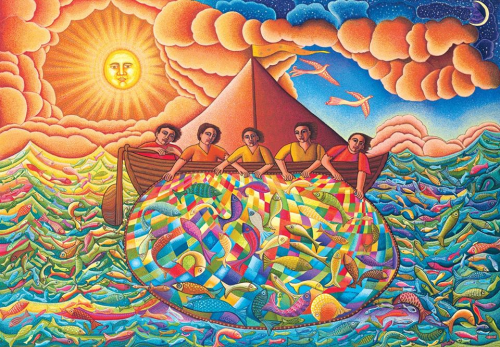 This morning I’d like to show you a painting of our gospel reading. This painting is called “The Great Catch” by artist John August Swanson. Swanson was an octogenarian: he lived until a great age—born in 1923 and he died just last year. He was Roman Catholic; his mother was Mexican and his father, Swedish.

The small details of life are where the sacred reveals itself

We begin this morning with loss and redemption.

In the story of the Great Catch, Jesus asks Peter three times if he loves him. This is known in Biblical scholarship as the 3 great affirmations. It can be understood as a reversal of Peter's earlier 3 great denials. You know them well:

Peter is standing outside the gate to the courtyard of one of the religious officials where Jesus has just gone in. And, the woman who guards the gate says to Peter: “You are not one of this man’s disciples, are you?”

Second denial: Peter is standing around a fire with some of the slaves and the police at the high court. And they say again to him, “You are not also one of his disciples, are you?”

“Didn’t I see you in the garden with him?” one of the slaves asks.

Peter shakes his head, denies it a third time and the cock crows, as the story goes, fulfilling what Jesus had said would happen when had that final meal with his friends before his death.

So, in today’s gospel reading in what feels like an almost painfully obvious reiteration of Peter’s denial we find the disciples once again at a meal with Jesus—this time breakfast, after Jesus has risen from the grave and is eating and drinking and talking with them. And Jesus asks Peter a question three times using Peter’s family name (it’s kind of like when a parent uses a child’s full name: not just Helen, but Helen Charlotte).

Jesus asks, “Simon son of John, do you love me more than these?”

Peter says, “Yes, Lord, you know that I love you.”

Jesus says, “Simon son of John, do you love me?”

Peter says, “Yes, Lord, you know that I love you.”

Jesus says a third time, “Simon son of John, do you love me?”

This time Peter gets a bit peeved. He’s upset. He gets it; Jesus is making a point about before; like does he really have to rub it in by asking a third time?

And Peter says, “Lord, you know everything, you know that I love you.”

Three denials—loss. Three affirmations—redemption. I think it’s no mistake that Swanson paints this colourful, vibrant abundant scene of the Great Catch just before the meal where Peter’s redemption takes place. The gospel writer and the painter making explicit one of the key messages of Jesus’ teaching and of the Christian faith: that loss, no matter how big, is never without the opportunity for redemption. The need to reiterate this in such an obvious, repetitive way signals, perhaps, our human propensity to think and feel otherwise—when it comes to redemption for other people, and perhaps especially, when it comes to redemption for ourselves.

The second theme in today’s painting, today’s gospel story, is that the small details of life are where the sacred reveals itself. I wonder if you noticed something strange in the telling of this story? It's a seemingly throwaway line where Peter gets out of the boat and into the water to meet Jesus, but not before putting his clothes on. Typically, you would remove your clothes, not put them on to go swimming. What does this mean?

The painting gives us a clue. Do you notice how vibrant and colourful and jam packed this painting is?

There are these two great lights in the sky: there’s this enormous sun and then in the background this blue sky that’s darkening, speckled with starlight.

There are these swarms of living creatures! Birds of every kind; these fish which have been fruitful and multiplied!

Then, in the top right hand corner here is this figure breathing over the whole scene: as if a wind from God sweeping over the face of the waters.

When we hear the story of the Great Catch, when we see it depicted here, we are reminded of Creation, the Great Creation story: “In the beginning God created the heavens and the earth…a wind from God swept over the waters …God made the two great lights—the greater light to rule the day and the lesser light to rule the night…God said, Let . . . birds fly above the earth across the dome of the sky . . . fill the waters in the seas.”

Then, God creates human beings. And, God blesses them and says to them, “Be fruitful and multiply, and fill the earth and subdue it; and have dominion over the fish of the sea and over the birds of the air and over every living thing that moves upon the earth.”

Having all of this in their care, we know what humanity does next: while in the garden tending to this Great Catch, this Great Creation, humanity eats from the tree of the knowledge of good and evil and all of sudden they become aware of their nakedness, which means they become acquainted with shame. And, when God comes to greet them and sees what has happened, humanity reaches for something to cover themselves, just as Peter puts on his clothes and jumps into the water when Jesus arrives to greet him.

Shame. The third and final theme in our reading and in our painting today. What would it look like if we considered shame always with the backdrop of creation? What would it mean if loss was always tied to the opportunity for abundant redemption?

When John August Swanson painted this image, he wrote this as a caption: “[This] story helps me to accept struggles and to appreciate the casting of my own “net” into the waves, and the surprise of experiencing the fruit and abundance that are there.”

“Put down your nets one more time. Don’t give up yet.” Amen.