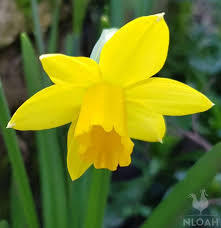 Did you know that Sundays do not count as part of the 40 days in Lent? When I learned this, every Saturday night, I stayed up until 12:01 am and then tore into the bag of mini eggs which had been staring at me for 8,640 minutes the week prior (8,640 is how many minutes there are in a week— minus Sundays).

Sundays in Lent are what’s known as “Little Easters”—when we celebrate the resurrection of Jesus no matter what (even while our alleluias and our chocolates are tucked away). Sundays, or Little Easters, are one of the ways we acknowledge the intertwinedness of life and death. I think of that prayer at the beginning of one of our funeral liturgies, where we pray, “In the midst of life we are in death.” Or, how about the paschal candle, the big one, as Henry calls it, which is lit at baptisms and during the 50 great days of Easter, and at funerals?

Even in death, even in the season of Lent, when we turn our attention to the shadows, light is never far off.

In our reading from the gospel of John this morning, we find one such “Little Easter” story. Jesus is having supper with Martha and Mary. We’re told that Lazaurs, whom Jesus has just raised from the dead, is there, too. This detail is so important John names it outright. He wants readers to know that even while Mary is anointing Jesus’ feet with perfume, preparing for his burial, Lazarus is at the table, too: resurrection present among them.

Now, who are Martha and Mary? Who is Lazarus? Some commentators believe Lazarus to be a relative of Martha and Mary. In L’Arche houses around the world, where people with disabilities live together in community with those without disabilities, Lazarus is known as a man with an intellectual disability living with his two sisters. Interesting take, eh?

And, of course, we know Martha and Mary, from their infamous feud. In the parallel version of today’s gospel, told by Luke, Martha is slaving away in the kitchen while Mary relaxes in the living room with Jesus. Martha loses it and says to Jesus, “Don’t you care that my sister has left me with all this work?”

Jesus will reply, “Martha, Martha, you are worried and distracted by many things; there is need of only one thing. Mary has chosen the better part.”

Hearing this, some of us will rush to Martha’s defence. How could Mary leave her sister with all the cooking and the cleaning? Some of us will praise Mary. Jesus is right there. Of course they should be sitting at his feet! Dorothy Sayers, one of the foremost theologians of the 20th century once wrote:

I think I have never heard a sermon preached on the story of Martha and Mary that did not attempt, somehow, somewhere, to explain away its text. Mary’s, of course, was the better part--the Lord said so, and we must not precisely contradict Him. But we will be careful not to despise Martha. No doubt, He approved of her, too. We could not get on without her, and indeed (having paid lip-service to God’s opinion) we must admit that we greatly prefer her. For Martha was doing a really feminine job, whereas Mary was just behaving like any other disciple, male or female; and that is a hard pill to swallow.

(I confess, I have always been Team Martha. As another theologian puts it, “if we commend Mary too profusely, she may sit there forever.”)

Fortunately, this isn’t a sermon about who got it right: Martha or Mary. No; today we consider what it means to always have the resurrection with us, even when death’s stench lingers nearby. If we see the story of Mary, Martha and Lazarus as a “Little Easter” then perhaps we can learn how to deal better with death knowing we’ll always have a mini resurrection in the room?

Let’s start with how we can sometimes get it wrong when it comes to dealing with death.
Jesus praises Mary for anointing him, getting perfume ready—‘attending to the stench of death.’ The mention of Jesus’ burial doesn’t lead to those at the table spouting cliches, dismissing the shock of what Jesus has just said. Jesus has literally just told them that Mary will soon be wrapping him in bands of cloth and anointing his body at the tomb. No one in the room pats Mary on the back and says, “This is all in God’s plan.”

It’s so easy to do, isn’t it? We recently lost a relative in my extended family, and when my sister phoned to tell me the first thing I said was, “That's so sad, but at least he’s in a better place now.”

Death stinks and it’s so much easier sometimes to distract rather than attend to the smell. There’s a special service that we’ll be holding at St Clement’s during Holy Week this year that’s related to this whole topic of death and how we sometimes just don’t know what to do with it. The service we’ll be holding is known as a “Hannah service” after Hannah in the Bible. It’s for anyone who has ever experienced infertility or pregnancy loss. The instructions for the service recommend naming up front what not to say when someone has gone through pregnancy loss. Top of the list are things like: “God needed another angel”; “It was God’s plan”; “Just relax; as soon as you stop stressing out, you’ll get pregnant.”

And if you’re wondering what to say, what is helpful, they recommend saying instead something like: “I’m so sorry”; “Can I sit with you for a while?”; “I’m here for you if you want to talk or if you don’t”; “I brought you a meal; I’ll leave it in the fridge.”

Martha, Mary, and Lazarus show us how to acknowledge resurrection (the presence of hope, of light) without dismissing or disregarding the stench of death. Martha prepares a meal—can you smell the freshly baked bread? Mary listens and anoints. Can you smell the perfume? Amen.

Dorothy Sayers, “The Human-Not-Quite-Human” in Unpopular Opinions (1947) reprinted in Are Women Human? (Eerdmans, 2005)