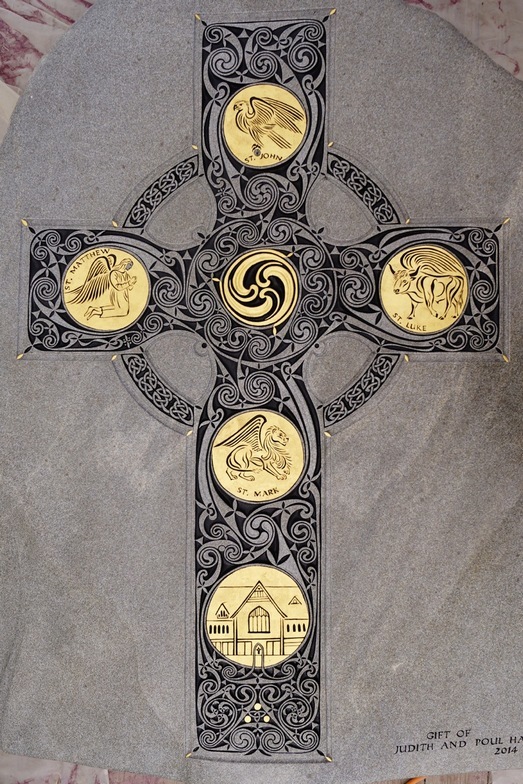 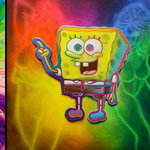 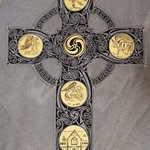 We’re going to get a little geeky today and take a close look at the doctrine of the Trinity. It’ll be fun, I promise, starting with three of my finest jokes involving the number 3:

What do you call a three-legged donkey? A wonkey.

3 clerics: a priest, a rabbi, and an imam, walk into a bar. The bartender says, “What is this, a joke?

The funny thing about the Trinity, is that it isn’t spoken about as such in the Bible. You can’t do a word search for “Trinity” and find it in the gospels, or the New Testament letters, or any of the Old Testament books either. Yet, the Church has felt the need to describe God throughout the centuries as three unique persons dwelling together as one, holy, undivided trinity.

If this is making you scratch your head a bit, you’re in good company. I reckon it’s why we’ve come up with so many imperfect illustrations and object lessons to try and define what exactly we mean by the Trinity in the Christian faith.

[Slide 2: Celtic Cross featuring Trinity on stone]
There are some beautiful depictions of the Trinity in Christian art. Here we have “original design work and custom carving in the densest monument-grade granite on earth.” This standing-stone outside Christ Church Cathedral downtown Vancouver weighs over 4,000 pounds. The “central triskel”, the “three armed spiral” in the middle of the Cross, refers to the Trinity. The carver Samuel Bates describes it as “an analogy for the Creator’s generation of everything from a continuous act of sharing [the Creator’s] own existence. All lines begin in the center [sic]; all lines lead back to the center [sic].”

Symbols for the Trinity are very common in Celtic Christian art.

[Slide 3: Triptych generic]
Another place we see the Trinity portrayed in Christian art is triptychs. The Oxford English Dictionary defines triptych as “a set of three associated artistic, literary, or musical works intended to be appreciated together.” You remember those tri fold displays you’d do for a school project, or one of those three-panelled displays you see at a tradeshow? That’s the idea. The triptych that is maybe most familiar in churches is the standard panel of three paintings that typically go above an altar. The panels are often joined together with hinges so the frames can remain open or shut.

Before I go a bit deeper into an example of a Triptych in religious art, I want to show you two examples of triptychs in contemporary art.

[Slide 4: Spongebob]
This is Michael Andrew Law Cheuk Yui’s untitled triptych, inspired by Roy Lichenstein (think Andy Warhol, that era). It’s untitled, but we can see it is clearly about Spongebob Squarepants! I love art. Some critics have called this piece “a deep, deep, meditation.” I actually really love that people would find something sacred in something so neon.

[Slide 5: Trickster]
Ok, and here is “Trickster Tale of Wisdom” by Dene artist, John Veltman, who currently resides in BC, in Coquitlam. Given our first reading was all about wisdom today, I thought we’d better have a look at a triptych about wisdom. Here’s what John Veltman has to say about this piece:

“Wisdom is gained by experience, [sic] the trickster has been depicted in history taking many forms. Intelligent and independent. Their wit grants them access to essential elements, [sic] however owl, sees through the darkness and spots raven, [sic] the only rational thing to do is confront him. Their intellects [sic] lock them in a state of equilibrium. [sic[ Until Raven unveils the light and blinds the owl to be freed.”

The trickster: a triptych of raven and owl.

[Slide 6: Andrejev Trinity icon based on Rublev]
Here’s the centre panel of the Triptych, which hangs in our Diocesan Cathedral. It’s at the reredos, the back of the Cathedral behind the altar. This is an icon written by Vladislav Andrejev. There are three panels to this piece: as I mentioned, this is the centre, called Holy Trinity; Holy Sophia (not pictured) is on the West panel, and Logos Emmanuel (not pictured) is on the East. Taken together they form a meditation on creation.

The centre panel, which is pictured here, is one of the most celebrated images of the Trinity in Christian art. It’s based on Russian artist Andrei Rublev’s depiction of the Holy Trinity as three angels. (It’s said that at the time that Rublev was living, in the 15th century, that Rublev saw the Trinity as “the embodiment of spiritual unity, peace, harmony, mutual love and humility.” A prayer maybe then as much as it is for us today, especially when we think about all that is going on in Russia and Ukraine?).

The angel on the left symbolizes God the Father, God the Creator. He blesses the cup as it’s in motion, as he passes it to the angel in the middle. The central angel represents Jesus the Son, God the Incarnate Word, who blesses the cup as well and takes it with a nod as if to say, “My Father, if it is possible, may this cup be taken from me. Yet not my will but yours be done” (that famous line from when Jesus is approaching his crucifixion).

The wings of two angels, the Father and the Son, the Creator and the Redeemer, overlap. The blue colour represents divinity; the brown, earth, Jesus’ humanity, and the gold the kingship of God. You’ll notice, if you look closely, that the wings of the Holy Spirit do not overlap with the Son’s wings. There’s a whole argument in Christian theology about whether or not the Holy Spirit dwells equally with the Father and the Son (ah, the things we do for fun on weekends!). The blue colour of the Holy Spirit’s robe represents divinity and the green, new life.

Finally, the equal placement of the angels on three thrones “at the same level” symbolises unity.

The doctrine of the Trinity is a nebulous thing. There’s no clear, direct reference to “The Trinity” in the Bible. It sort of gets thrown out to us in images throughout the scriptures where we see these three persons, these three portraits of God that are unique in their own right but mutually dependent and interdependent. When we’re looking for the Trinity in scripture we ought to have our eyes peeled for triptychs, when three names or portraits for God are put side by side, in conversation with one another. The reading from Proverbs, wisdom side by side with creation and the Creator (the Lord), each one, each panel, if you will, unique, but all intended to be appreciated together. Today’s gospel reading: Jesus (God the Son) references God the Father, and God the Spirit of Truth who is coming. Three in One, One in three.

I don’t have an answer for that. Maybe you have some ideas? Maybe it’s a way of distinguishing Christianity amongst the monotheist religions? If you take the Abrahamic tent, for example, Christians, Jews, and Muslims all believe in one God, but Christians uniquely believe in one God revealed in three persons (Father, Son, and Holy Spirit, and so on).

There’s no perfect way to explain or define the doctrine of the Trinity in Christian belief. We try imperfectly, but what’s important is that we do try because it demonstrates our commitment as Christians to mutuality—that things get done in relationship; the recognition that our actions and our own individual lives in community are unique, yes, but they hinge, depend on others and one another. Amen.