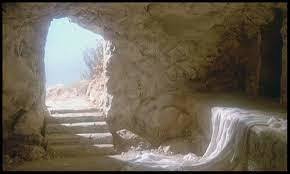 There’s a tradition amongst African-American preachers where the preacher gives the congregation a word or a phrase from the scripture reading of the day. Then, they ask the people in the pews to turn to their neighbour and say that phrase to their neighbour. So, this morning, in appreciation of that great tradition, I’d like to ask you to turn to your neighbour. Tap them on the shoulder and would you whisper to them, “He’s not here!”?

Would you turn to your other neighbour and would you say to them, “He’s not here!”?

And this side, would you go ahead and add a bit more volume and tell them right back, “He’s not here!”?

Friends, I say to you again this morning:

Christ is risen! (The Lord is risen indeed, Alleluia!). That is the message of the sermon this morning and the reason we are gathered here today.

What a journey it has been. Last Sunday, we began with Jesus riding into Jerusalem on a donkey. Tuesday, we recognized Jesus who sits with us in our own grief, taking some time at our Tenebrae service to remember all who have experienced infertility and pregnancy loss. On Thursday, we recalled the final meal Jesus had with his disciples and the institution of the sacrament of the Eucharist. We washed feet and had our own feet washed, following the example of Jesus who taught that strength and growth in the kingdom of God comes not by power, authority, or even miracle, but by such lowly service.

As evening came last Thursday, we stripped everything from the church—all of the furnishings, hangings, and candles. And then we washed the altar with water and with the wine that had been consecrated at our meal, a symbol of the blood and water that would pour forth from Jesus’ side on the Cross.

While it was still early this morning, we gathered and lit the new fire—asking the Creator to inflame us with new hope. We lit the paschal candle, a gift from Mount Olivet Lutheran Church. We traced the numbers of the year 2022: Christ yesterday and today, the beginning and the end. We traced Alpha and Omega: a symbol that all time belongs to Christ. We pressed five incense beads into the candle in the shape of the cross and we prayed: “by his holy and glorious wounds may Christ our Lord guard us and keep us”.

And now, now, we have proclaimed the great promise of Easter: Christ is risen!

So why, why do we look for the living among the dead?

In today’s gospel, the women are at the tomb, spices in hand (death stinks, yeah?). The stone is rolled away, but Jesus’ body is not inside. Two men appear in dazzling clothes. (If you want a fun Bible study, go and read the places where “two men” appear in the gospel of Luke. I’ll tell you quickly about a couple: there’s the transfiguration, when the disciples are on the mountain with Jesus and “two men,” Moses and Elijah, appear with them.

Then there’s the story that Jesus tells about the “two men” who go into the Temple to pray: one’s a religious leader and the other a tax man. The religious leader prays, “God I thank you that I am not like other people: thieves, rogues, adulterers, or even like this tax collector.”

The tax collector prays, “God, be merciful to me, a sinner.”

And Jesus points to the tax man and says, “this man, this man went home justified.”)

The women are at the tomb with their spices. Jesus’s body is not there. Two men appear and maybe it’s Moses and Elijah; maybe it’s the priest and the tax man? The two men say to the women, “Why are you looking for the living among the dead? He is not here, but has risen. Remember how he told you, while he was still in Galilee, that the Son of Man must be handed over to sinners, and be crucified, and on the third day rise again.”

The women remember and they go running to tell the other disciples and the eleven apostles. And, even though it’s Mary Magdalene, Joanna, Mary the mother of James, and oh, let’s say a dozen or so other women who have just seen the empty tomb with their own eyes, the apostles say: “Sounds like an old wives’ tale to me.”

But then, Peter gets curious. He sneaks away to the tomb and sees for himself that Jesus is not there and he is amazed!

What are the places in our lives where we have been looking for the living among the dead? What old habits, old patterns, old ways of being do we keep coming back to because anytime we hear about doing life differently we chalk it up to just another old wives’ tale?

On this Easter Day, let’s get curious. Let’s see for ourselves that there’s a new way of life out there. ‘Cause it ain’t inside the tomb. Alleluia!