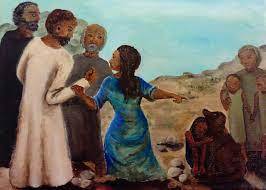 When I was in University, I studied Koine Greek, which is the language of the Gospels and the New Testament letters. One summer, I was preparing to translate the Gospel of Luke and the Book of Acts with a scholar who was working out of the University of Lampeter in Wales. Before I left for the summer, a kind and wise professor sat down with me and explained his fear about students who begin academic study of the Bible. You might find, he cautioned, that the questions you had about life and religion that before had good and definite answers all of a sudden get turned upside down. Some, many, students lose their faith, disenchanted when they scratch below the surface and learn that things aren’t as straightforward as they seem.

I tucked this away and went off for the summer to study. Day 1 of the project, the scholar I was working with said to me, “You do know that we don't have the original version of the Bible? We only have copies, and likely only copies of copies.”

Over the summer I would learn how scribes, when they were copying manuscripts of the Bible, how they would make errors and sometimes deliberate choices to correct those errors. I would learn about the field of biblical studies and how it emerged over the centuries to try and sort out where these changes in the text occurred and why.

The gospel reading that we have before us today, is one such passage where scholars have tried to figure out if Jesus really did say what he says in this passage. The reason being, what Jesus says is really quite upsetting.

He’s in the region of Tyre. Despite his best attempts to remain out of the public eye, a woman hears he’s in town and brings her daughter to be healed. We don’t know the woman’s name; we only know she’s a Gentile, of Syrophenician origin---an outsider. When she begs Jesus to heal her daughter, Jesus says this: “Let the children be fed first, for it is not fair to take the children's food and throw it to the dogs.”

Remember that Jesus is raised in a time when his family and community are oppressed, their land occupied by foreign rulers. Jesus is raised on the prayers of a people desperate for a Messiah, for God to send an earthly ruler who will bring emancipation, healing.

So when this woman who isn’t from Jesus’ hometown, oppressed as she might be also, when she asks Jesus to heal her daughter, we see Jesus respond with what he knows.

“Actually,” he says, “My people have been waiting an awfully long time for healing. Why should you get to jump the queue?”

What gets translated as “dogs” in our Bibles really is as offensive as it sounds. It’s the same word we find in the book of Revelation when the writer is talking about Eden being restored. Inside Eden, is the tree of life. Outside Eden’s gates are the “dogs”---the “sexually immoral, the murderers, idolaters, and everyone who practices falsehood.”

When Jesus refers to this woman as a dog, he is using language to discriminate against her. And this is where the question I asked you at the beginning of the sermon comes into play. What do we do with Jesus who appears to discriminate? Is there a definite answer, some way to read the story that gets Jesus out of the proverbial dog-house?

The short answer is “no.” Jesus really did say what he said. So the question for us becomes, how do we move from resolving to honouring this difficult text?

What if the very question that we have of Jesus is one that we need to ask of ourselves? As we wrestle with whether or not Jesus was capable of discrimination, what if we asked: Am I capable of it, too? Like Jesus, are there situations in my life where I fall back, default to patterns of thinking that are instinctual for me, but discriminatory for others? If discrimination is possible for Jesus, who is very God and very human, is it something I need to pay attention to, as well?

Jesus is fortunate in that the Syrophenician woman calls him out. She tells him that “even the dogs under the table eat the children’s crumbs.” Meaning, when it comes to God’s  healing, God does not discriminate. Everybody gets to eat. Jesus appears to discriminate in this passage and he also appears to listen and change his thinking when he gets some feedback. The woman’s daughter is healed, and when Jesus encounters another outsider asking for help, this time he doesn’t hesitate. He puts his fingers into the person’s ears, and says, “Be opened.”