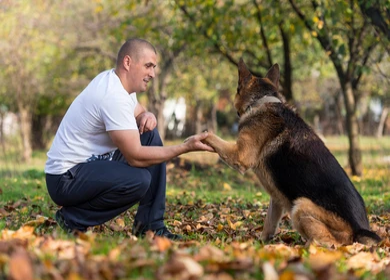 It truly is so wonderful to see everyone here this morning---with your pets! I grew up with Bichon Shih Tzus. My partner grew up with a Lab. We've agreed that if we ever get a dog we'll meet somewhere in the middle and get an Irish Wolfhound.

I once had a friend who was going through a really difficult divorce. When he and his partner split up, the first thing he did was get a dog. He got a German Shepherd and for about a year, whenever we got together, we’d talk about the ‘two D’s’: the dog and the divorce. Just as the dog was going through training, so also my friend was picking up new skills, learning to live on his own for the first time in 23 years. Just as the dog was growing into these enormous paws, so also my friend was getting used to this new space in his life, what felt like this big unknown.

It’s a tough reading from the gospel of Mark this morning. One of the most debated passages in the Bible on the topic of divorce. This morning I wonder if we can take a look for just a minute or two and dig a bit deeper into what Jesus says here.

Some Pharisees have come to Jesus with a question. Now, if we were to imagine Pharisees in modern Anglican terms, these are your wardens, your priest and your deacons, and your elected parish representatives, effectively your Parish Council. So the Parish Council of first century St Clement’s church (you’re with me), it’s their Annual General Meeting, and they’ve invited Jesus for a Q and A. They say to him, “Is it lawful for a man to divorce his wife?”

Now let’s imagine that this isn’t entirely an innocent question. Let’s say the Parish Council has been writing certificates of divorce for couples within the community. More and more they’re doing this for one person’s financial gain while the other partner suffers. Let’s say the Parish Council is doing this because it’s people who hold a lot of power who are coming to them, and it’s hard to say, “no” without things becoming difficult for the church. But some folks in the community are starting to question why so many certificates are going around. Why is it that, all of a sudden, some folks are pulling up to church in a Lamborghini while their former spouse is living on the street?

So the Pharisees, the Parish Council, they’re hoping that this Q and A will get them off the hook. That they can say in front of everyone, “See, Jesus has no problem with what we’re doing.”

“Well, what did Moses command you?” this is what Jesus says in response to their question. As if to say, “You already know the answer, what are you really getting at here?” So, the People’s Warden opens up the bylaws, the Canons and Regulations of the Anglican Church, and says, “Moses allowed a man to write a certificate of dismissal and to divorce her.” And then he closes the book, thinking the matter is settled. Except Jesus isn’t finished answering the question.

“Hang on a minute” we can imagine him saying. And he reminds them just how much God cares about something called interdependence. He points all the way back to Creation. When God created the earth, there was night, which was created because it depended on the day; there was evening, which was only brought into existence because it depended on the morning. When God created humans, humanity was not complete until a second human had been formed from the rib of the first. The two dependent on each other. All of this, all of this interdependent creation God calls very good. By pointing them back to Creation, Jesus is telling them that God delights in people being there, showing up for each other. But when that interdependence becomes not so very good, irreparable, then new and different supports need to be formed.

But if the question is, “Is God okay with people misusing the law so that one person gets rich while the other falls into poverty?” then Jesus’ answer along with the whole of creation is “Not a chance.” That's not the kind of care God imagined when the heavens and the earth were created.

What does any of this mean for us today? I think I want to say with whatever authority these robes might carry, that I am sorry for the way the church has talked about divorce. I am sorry that we or the people we love have been made to feel ashamed about divorce. Jesus once said, “I did not come to abolish the law and the prophets, but to fulfill them.” In the context of today’s passage, I think that means that Jesus doesn’t actually say divorce is wrong; he doesn’t abolish it. He shines a light on the places where the laws concerning divorce have been misused, applied unjustly, benefitting the powerful at the expense of the vulnerable. We kind of have to take a second look to get that, don’t we? Kind of like how you only have to sit and listen to a person who’s lived through a divorce to know that they’re some of the bravest people in the world.

My friend’s German Shepherd made a difference in his life the year he got divorced because this (not so) little dog reminded him every single day that he was loved. There really is something to be said for interdependence, for the way that people and pets show up to care for each other in their time of need. It’s no accident that the prayer attributed to Francis, the patron saint of animals, is a prayer for peace, love, hope, and joy. This is what animals bring to our lives. This is what Jesus shines into our hearts. This morning I’ll close with the prayer of St Francis and if you know the words please join in: