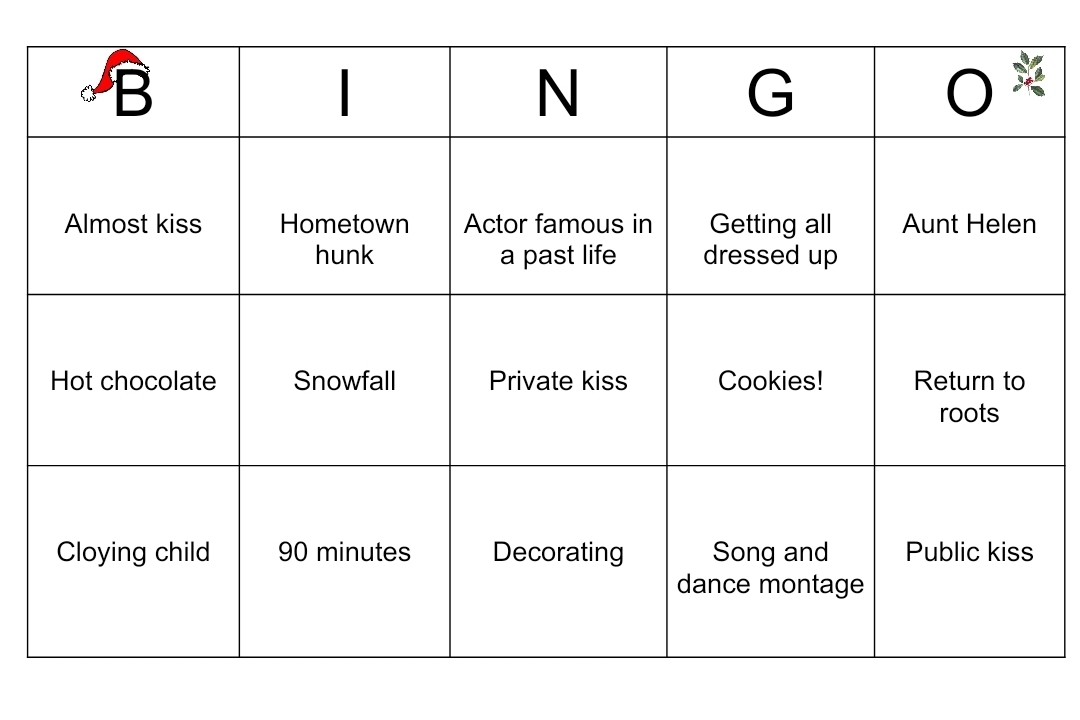 “You mean to tell me there was more than one lobster present at the birth of Jesus?”

So goes one of Emma Thompson’s famous lines in the Christmas classic, Love Actually. Her daughter has just come into the kitchen and announced that she’s been cast as a lobster in the school nativity play.

T’is the season for holiday movies! This year, I have to tell you, I have watched every one of them. A friend and I started to notice certain tropes that show up over and over again—especially holiday movies of the Hallmark ilk.

I actually created a bingo card. I'll show it to you here:

Call it cliché. Call it cheese. These are some of the signs and symbols of the holiday season that let us know it’s Christmas. And, one of the reasons I think these movies are so appealing, especially this year, is that they speak to that yearning we all have, on some level, I think, for things to return to normal.

Only there’s not much that’s “normal” about these Hallmark movies, is there? In what universe do your Christmas cookies get baked on time—or at all? In what world does your love life fall neatly into place? When else do those complicated family dynamics get resolved just in time to sing “Silent Night” on Christmas Eve?

So this year, I've been wondering: what would have happened if the Christmas story had been written as a Hallmark holiday film?

Mary, a teenager, has just found out she’s pregnant. She’s worried how the family will react when she goes home for the holidays. She and her boyfriend Joseph decide it’s probably best to tell the family they’re engaged. Maybe, just maybe, they can get married in time before anyone does the math.

Then, an angel appears and gives Mary and Joseph an even better idea: tell the family you’re pregnant with the Son of God! With this baby all of the aunts and uncles and grandparents will be taken care of. Because, guess what? This baby is gonna be a wealthy and powerful king! You’ve just inherited Christmas—yay!

That’s not really how the story goes, though. Mary and Joseph head home for the holidays, not first and foremost to celebrate with family, but because of a decree that’s come out from the Emperor for all people of a particular ethnic origin to be registered. The Emperor is increasingly worried that they're becoming too numerous, that the Empire could be overthrown.

Mary and Joseph return home for the holidays longing, I imagine, for things to return to normal, to feel safe enough to return to the traditions, and to be among the people, who make them feel most at home.

This resonates with us, on some level, I think. We are, once again, wishing we could be in person at church this Christmas, to stand shoulder to shoulder singing our favourite carols; to hear the familiar readings; to be held in the familiar warmth of candlelight.

I'm also mindful at this time of year of refugees around the world, and fire and flood victims in British Columbia, who long for things to return to normal, to be able to return to the people and places they call home.

I keep thinking about the shepherds in the Christmas story. The angel tells them they will find this newborn saviour wrapped in bands of cloth and lying in a manger, not in some royal crib in a palace. Because, humility, not power and wealth, is how they will recognize this newborn king.